For large energy users, energy management in recent times has become fraught with risk. 2016 ended with a near 50% increase in the total cost of electricity in Australia's eastern states. Questions of energy affordability merged with concerns for energy supply security, propelled particularly by the state-wide blackout in South Australia in September 2016.  While market regulators pointed to problems with the effectiveness of the transmission and distribution management systems within that state, the headlines chose instead to focus on South Australia’s high proportion of intermittent renewable energy sources.  As the issue continues to play out, we are seeing acrimony between the Commonwealth and State Governments over the States’ renewable energy targets, calls to scrap the RET when ERM Power opted to pay the penalty for purely commercial purposes1 rather than source Large-scale Generation Certificates (LGCs), and the re-emergence of ultra-critical coal-fired power stations2 presented as an option by the Commonwealth to address supply security despite their high costs (about $A134-203/MWh and rising to $352/MWh if CCS is added3, which is three to five times the cost of renewables or combined-cycle gas at present).

In this article, Energetics argues that the current political discourse should not distract large energy users from considering renewable energy supply options.

Most recently we’ve seen the Australian Energy Council (AEC)4 categorically stated that the electricity supply industry has “no current investment appetite to develop new coal-fired power in Australia” and that their investment focus has shifted to gas generation, renewables and enabling technologies like storage. Last week the Business Council of Australia (BCA) and Australia Industry Group (AiG)5 also came out strongly against ‘further changes to the RET, which has a key role along-side other policies to facilitate the transformation of the energy sector.

Why the strong support by industry peak bodies for renewables? There are many reasons, but consider that in the roughly five years or so it would take to bring an expensive new ultra-supercritical coal-fired power station on line in the Australian market, the cost of renewables will continue to come down. And perhaps more importantly, the utility of renewables will continue to improve as the cost of many energy storage technologies (for uses ranging from microgrids, distribution substations, frequency control and peak demand management) will fall by ~40% by some estimates6.

So there are strong signals that 2017 may be the year where economic considerations, rather than Government policy becomes the major driver of both corporate energy procurement strategies and investment in energy infrastructure. For large energy users this will require a longer term strategic view and the ability to cut though the short term political noise.   A renewable energy supply contract – also known as a corporate renewable power purchase agreement (PPA) – is an option for large energy users that provides a hedge against energy market volatility.

Back in 2014 we advised clients to lock in fixed electricity prices for as long as they could when electricity futures markets were at a low. The maximum term was typically three years, concluding in CY17. This advice served our clients’ well, with CY2017 base futures strips currently trading at more than double the average futures contract market prices for the CY15 to CY17 in 2014:7

Our advice to clients approaching the market in 2017 is very different. Aiming to replicate their 2014 electricity procurement strategy is likely to result in the doubling of the cost of electricity and environmental charges. A different strategy is required, not only because electricity futures contract prices are expected to remain high, but also due to the risks associated with increasing volatility in the NEM and emergence of new opportunities to mitigate these risks.

In short, the 2017 energy market is very different from 2014. As illustrated below, a number of local and global8 market forces are aligning to make offsite renewable energy an economically attractive option for large energy users. 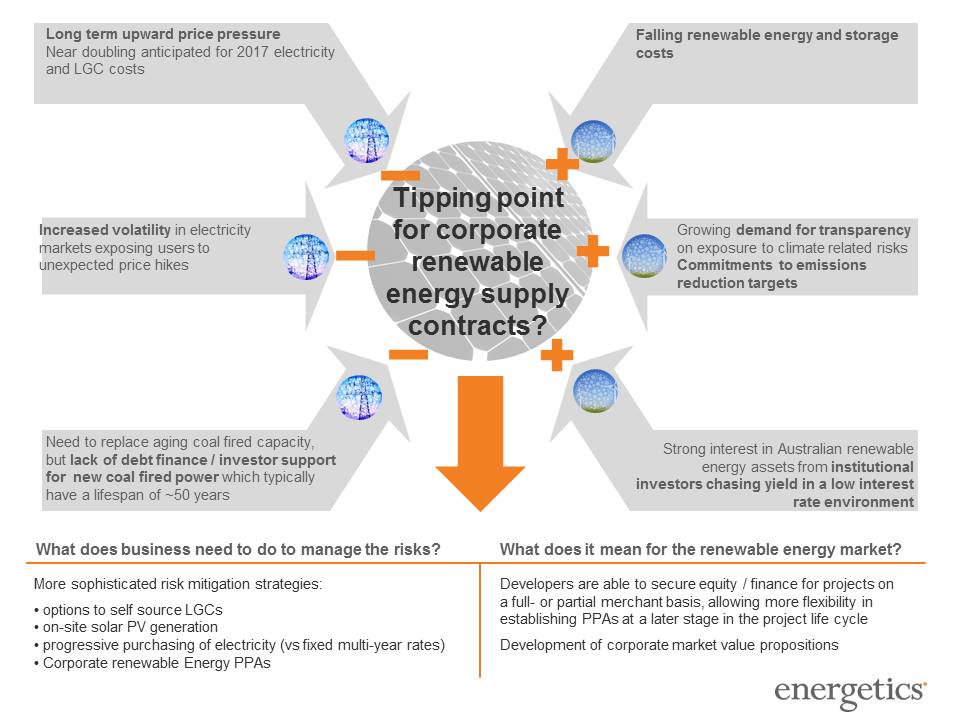 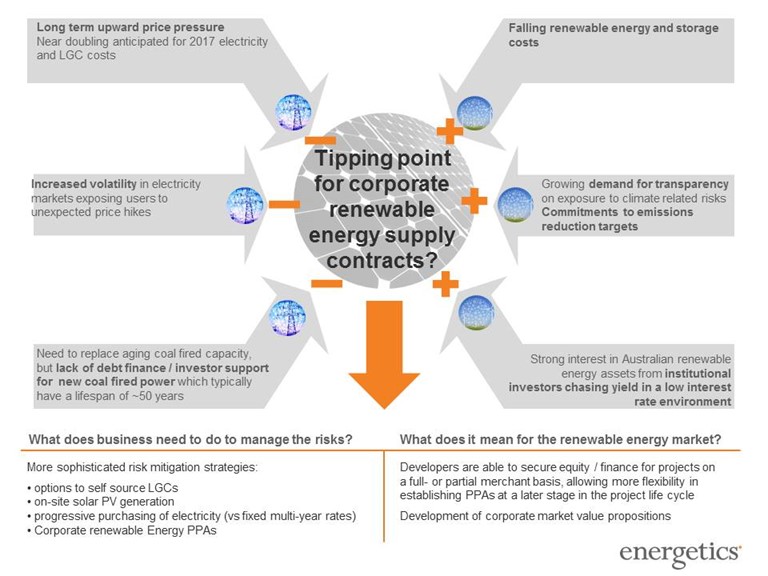 The rising costs of grid-supplied electricity, coupled with the falling costs of renewable energy production have resulted in a narrowing of the price difference between renewable and traditional energy sources. For large energy users contracting with a renewable energy generator and / or retailer to meet all or part of your energy supply needs is now a commercially viable proposition.

However, whilst a corporate renewable PPA is a well-established mechanism in the USA and some European markets, there are limited precedents in Australia. Unlike Europe and the USA, regulatory challenges also place some limitations on the implementation of corporate renewable PPAs in Australia without using a retailer. Retailers and generators have however shown interest in a number of large-scale corporate renewable PPAs expected to be concluded in the first half of 2017. This includes the Sydney Metro Northwest and the City of Melbourne’s Renewable Energy Buying Group for which Energetics is providing technical and commercial advice. More recently organisations as diverse as the Queensland Government, various local councils and a national retailer have also approach the market for off-site renewable energy supply options to meet their electricity and LGC requirements. Numerous large energy users and renewable energy developers have also approached Energetics with regards to LGC only or LGC and power offtake agreements with large end users.

Interest is certainly growing and unlike a year ago, 2017 will see an increase in the number and diversity of merchant projects in operation. This will not only reduce the risk to corporate off-takers, but also significantly shorten procurement timelines and potentially provide for increased flexibility in procurement terms. Following the conclusion of a few large deals, innovative contracting models will emerge to deal with some of the regulatory challenges and build on the lessons learned by all parties engaged in these transactions.

Where are the options for large energy users?

Large energy users have a range of options to improve energy productivity9, but here we will focus on procurement strategies to reduce energy costs.

Self-sourced LGCs: Some of the increases in energy-related costs can be attributed to LGC pass through charges. These are estimated to account for a $10/MWh increase in rates due to the rise in both LGC prices and the renewable energy power percentage (RPP). LGC cost drivers and management strategies were discussed in a separate article in August 2016, titled “Proactive strategies for corporates to drive down the cost of compliance and voluntary LGCs”.  It has become standard practice for large energy users to retain the right to self-source LGCs with many now actively exploring ways to exercise that right.

On-site solar PV: Due to high LGC prices, falling component prices and the maturity of the installer market, on-site large (>100kW) commercial solar PPAs can deliver positive cash flows from day one.  We are working with a number of clients to run competitive sourcing processes and ensure robust commercial terms that protect the interests of energy users over the term of the agreement.

Alternative electricity procurement and hedging strategies, tailored to the business’ specific requirements and tolerance for risk. This includes progressive forward purchasing (ie buying in ‘blocks’ in advance as discussed in our article, “A tailored and market driven approach to electricity procurement: it may be your best response to energy market volatility” in September 2016) to enhance budget certainty at times of increased market volatility10. Businesses are now also advised to consider corporate renewable PPAs for part or total load as a strategy to reduce exposure to electricity price volatility, increase budget certainty, reduce environmental compliance and energy costs, as well as mitigate carbon-related risk exposure. Executing a corporate renewable PPA is not without challenges, but credible counterparties have emerged and the contractual mechanisms exist to govern the successful implementation of such agreements.

Energetics can assist companies with a strategic option assessment, business case development, design of a market offer including key commercial terms, running the procurement process and technical and commercial support with the assessment of market responses.

For further advice on Energetics’ services and how your business can best manage the risks of buying in volatile energy markets, please contact any one of our experts.

[3] RenewEconomy | “Clean coal” most expensive new power supply, says BNEF (and not all that clean)

[4] The Council represents 21 major electricity and downstream natural gas businesses operating in competitive wholesale and retail energy markets. These businesses collectively generate the overwhelming majority of electricity in Australia and sell gas and electricity to over 10 million homes and businesses

[10] Energetics | A tailored and market driven approach to electricity procurement: it may be your best response to energy market volatility