One of the more recent developments we’ve observed in the NEM is the downward trend in gas powered generation, raising concerns as to whether there is more pain to come for east coast industrial consumers.  But there are other trends that are creating risks for large energy users.  This article steps through these additional influencing factors.

Gas fired generation for the east coast market is declining

Figure 1 shows a clear recent declining trend in natural gas generation across all jurisdictions. What we see are gas fired generators choosing the most attractive return on limited gas resources. With the exception of events in Tasmania arising from the failure of the Basslink interconnector for all Q1 2016, most jurisdictions registered record low seasonal generation, particularly during Q4 2016 where the approaching summer peak demand was met by hydro generation. Unprecedented domestic summer gas prices during Q4 2016 also led to the curtailment of gas generation.

With gas price forecasts rising off continued tightening of the domestic gas market, combined with the announced withdrawal or curtailment of some larger gas fired generation assets, which have traditionally provided both baseload and additional peaking capacity, clients must carefully assess their price risk exposure.  Risks could increase with any delays in procurement if using a traditional all-at-once fixed price and time approach.

Volatility (not just prices) in the futures markets is trending up – are we seeing increasing perceived risks for retailers?

The figure below plots the ‘Bollinger bands’ of the price of the exchange traded futures contracts for FY18 in NSW. This analysis shows the two standard deviations away from the 21-day simple moving average. Because standard deviation is a measure of volatility, when the markets become more volatile, the bands widen; during less volatile periods, the bands contract. 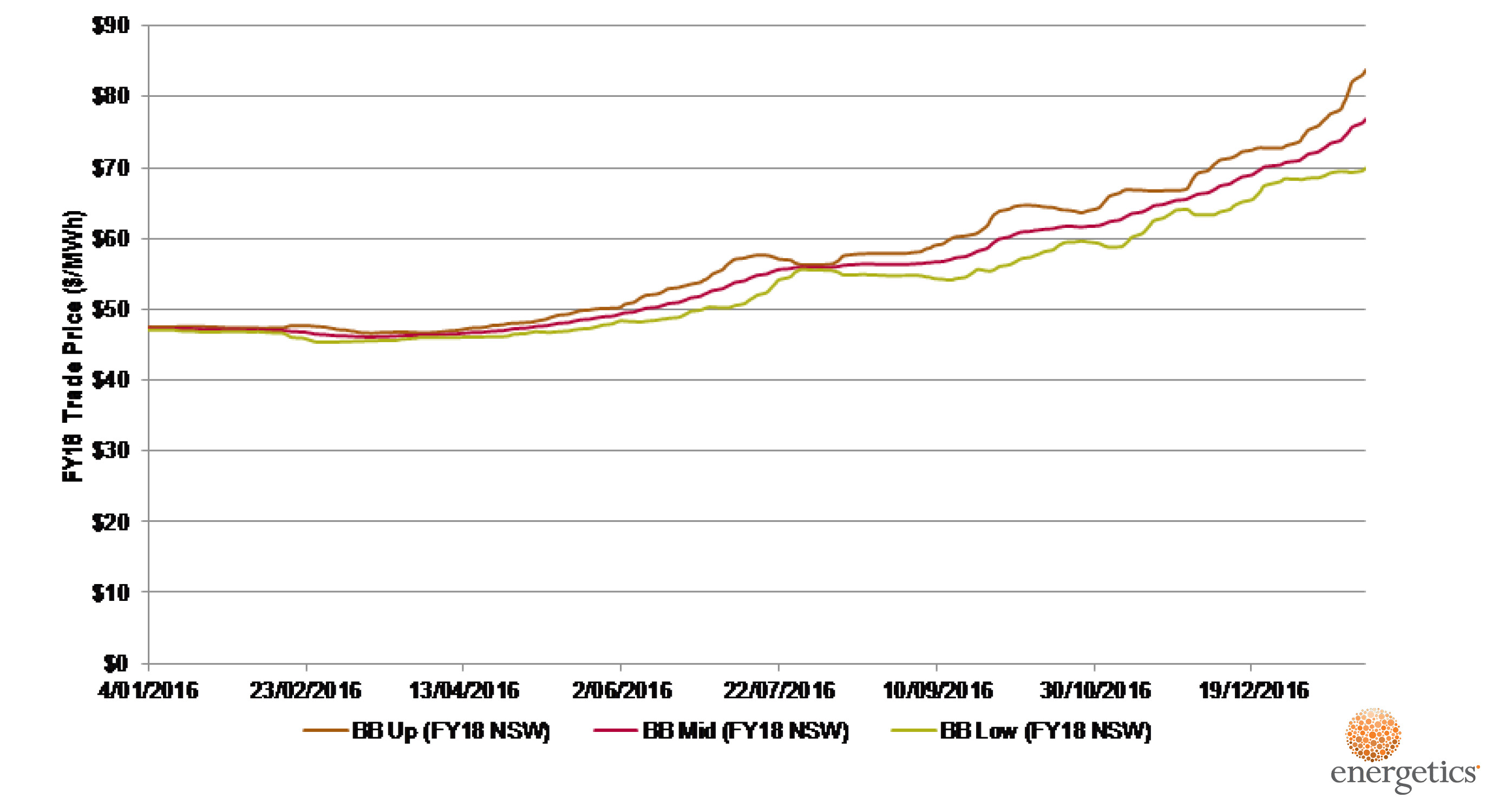 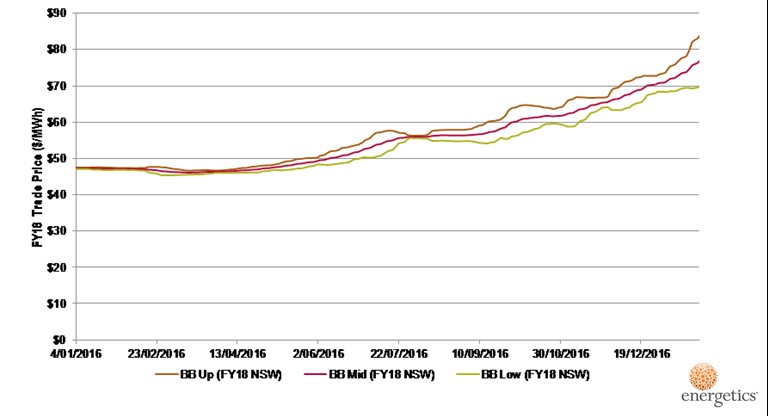 The significant increase in price volatility, experienced in the futures markets across all NEM jurisdictions (not just NSW) over the last few months, should lead to an increased focus on the development of an electricity sourcing strategy that aims to at least partially hedge this price volatility, and a contracting approach to reduce your retailer’s risk premium.

Liquidity on exchange traded volume is trending down – is there less market transparency?

The following graph is plotting the total volume in ASX Energy futures exchange market year-on-year by NEM jurisdictions over the last 10 years as well as the total face value of the futures contracts.

In the 2005 to 2012 period these trading volumes have been increasing despite the vertical integration of generators and retailers, which tends to decrease the volume of traded derivatives, as hedging is undertaken within an organisation.

Over the last three years the volume of forward contracts negotiated via the futures exchange has decreased. This type of contract represents a small proportion of the total trades and it seems that this proportion is declining.

There are likely more over-the-counter (OTC) transactions, with forward contracts directly negotiated between retailers and generators, and not through the Exchange. Another possible explanation is that with increasing spot-market price and volatility, generators may decide to reduce the proportion of their generation capacity that is forward contracted. The generators’ motivation for forward contracts is to hedge their risk if the spot-market price is too low and firm up their forward income stream. With high spot-market prices, the risk hedging is less prevalent and keeping part of the books open, allows the generators’ trading desk to generate more profit from short term trades. If this trend is confirmed, we can expect less transparency on retail contract pricing and increasing risk of spot volatility.

With increasing correlation between gas and electricity markets, a continued tightening of the domestic gas market, increased price volatility and decreased liquidity on the exchange traded electricity derivatives, Energetics can advise on the most appropriate hedging strategies with appropriate trade-offs between flexibility in forward purchasing and capping your energy budget risk.