Energy prices are renowned for being extremely volatile and unpredictable. Wholesale energy prices are influenced by a range of factors; these include weather, local economic activity, global ﬁnancial outlook, international prices, resource availability, investment in future resources, government policies, market sentiment, and the physical or mechanical constraints on plant or infrastructure.

The past 12 months have demonstrated how volatile spot and futures markets can be, with 30 to 50 percent increases in futures contract prices in a matter of 6 months, making it difficult to manage budgets and control costs. Time-to-market for procurement exercises is an even more important control point to counter the impact of increasing price volatility. With electricity and gas contract prices on the rise and little sign of relief on the horizon for energy users, Energetics has seen up to $1m in avoidable costs incurred by businesses which didn't take advice to engage early and accept competitive offers at the right time.

As business looks to plan and budget their energy spend, Energetics considers the impact of decisions taken over the past 12 months and how they could manifest over 2017.

The cumulative impact of a number of market risk factors

In late 2015 a number of events were triggered which over the course of 2016 would drive energy contract prices to unprecedented levels for both electricity and gas.

In October 2015, Alinta Energy announced it would be closing the Northern Power Station in Port Augusta, South Australia.  Futures prices rose immediately, raising concerns across stakeholders in the National Electricity Market and throughout the media over security of supply in a state which relies heavily on renewables.

Shortly after, in November 2015, the first Liquefied Natural Gas (LNG) exports left Gladstone, Queensland, commencing what would become a lucrative contributor to national GDP as Australia moves towards being the largest LNG exporter in the world.

Late December 2015, the Basslink cable between Victoria and Tasmania was damaged, cutting off electricity supply into Tasmania which was in a critical state with low dam levels to supply hydro generation, putting Tasmania’s energy supply at risk.  200MW of diesel generation needed to be sourced, installed and commissioned in the months that followed, and while successfully rolled out, its requirement for dispatch into the market became unnecessary following the late arrival of much needed rainfall. The event however has left Tasmania determined to avoid a repeat and will likely see the rebirth of local gas fired generation in the next 12 months.

In May 2016, Engie’s Chief Executive Isabelle Kocher announced that the utility was considering the closure or sale of its Hazelwood coal-fired power plant in Victoria as part of its move away from operating any coal-fired plants.

These events proved to be catalysts for market movements over the 2016 year.

Key events in 2016 which saw step changes in futures pricing began in July with the high price events across the NEM, in particular South Australia, who were now without the Northern Power Station. Driven by high winter demand, low wind generation, planned upgrades on the Victoria to South Australia (Heywood) interconnector and low levels of gas fired power generation coinciding with high priced spot gas, it appeared a number of events were combining to challenge both the energy markets and Australia’s energy policy settings.

However, this metaphoric ‘perfect storm’ in terms of energy costs, momentarily took a back seat to energy supply security in September as an actual severe storm event took out significant transmission capacity in the Port Augusta region, triggering a closure of interregional interconnectors and taking wind generation offline. The South Australian blackout cost the economy a reported $367m .

If the year hadn’t been tracking badly enough, the rumours leading into the November announcement of the Hazelwood power station closure in Victoria, again saw prices lift, most notably in Victoria, but also affecting neighbouring states across the NEM via the interconnectors.

This mix of events resulted in significant uplifts (e.g. $20 to $25 per MWh) in a matter of months for the electricity futures derivatives across all NEM jurisdictions as illustrated below. 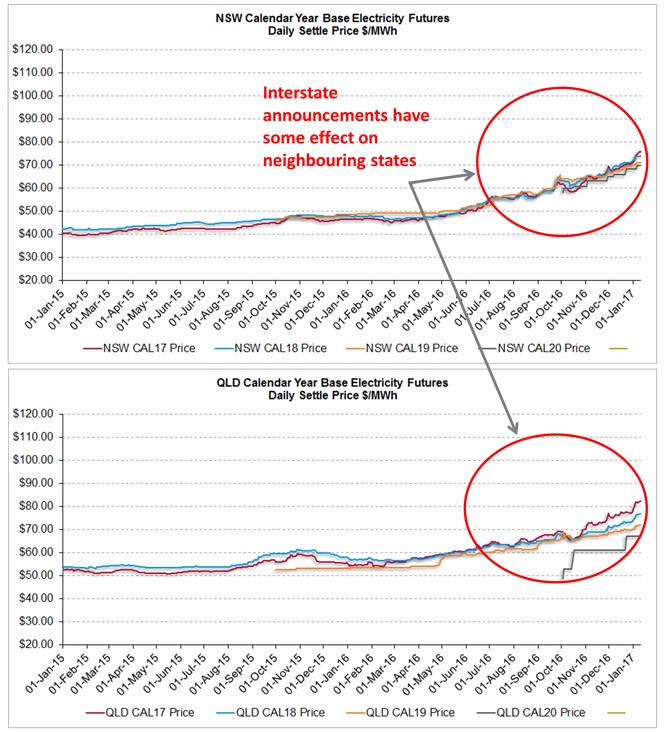 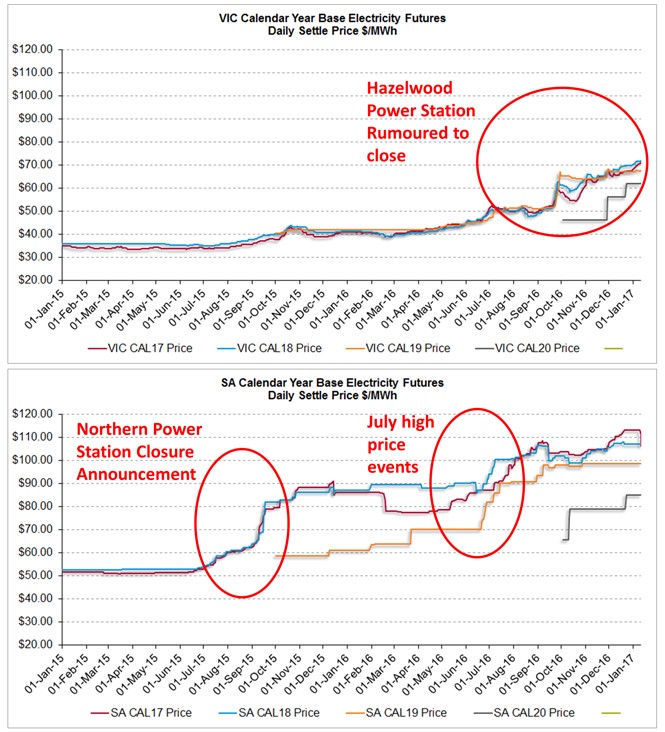 Risks need to be assessed and managed

With the benefit of hindsight we can reflect on ‘what if’ scenarios, however what we need to continue to consider are the risks of financial loss brought about by not engaging with the market early enough – in other words, considering your business’ options for energy procurement strategies. As mentioned earlier, we are aware of consumers who, in searching for better offers over a period of 3 months, were $1m worse off than had they accepted the market offers they received at the time of tender.

The short notice at which Victoria’s largest generator was removed from the NEM had a bigger, faster price impact in the market than the rumours of plans to build 1600MW of baseload as a replacement. In other words, a market change that provides relief to contract pricing is likely to be slowly factored into the futures market, unlike the rapid price jump seen when supply is removed at short notice.

One of the drivers of the higher electricity prices was the cost of spot gas. The commencement of LNG exports saw Australia exposed to global benchmarking, tightened supply; and in turn the ability for retailers to competitively contract large Commercial and Industrial (C&I) customers was undermined. High gas spot prices played a part in electricity pricing events in 2016 as the cost to purchase spot gas for electricity generation was high and firm contracts limited in supply. As outlined in recent media, with rising electricity prices, the return on selling a gigajoule of gas into a volatile electricity spot market may prove to be more profitable than competing to win a gas contract by offering the lowest possible price.  This has affected C&I customers in terms of market competitiveness resulting in high observed price uplifts and stricter terms and conditions. The fact that those renewing 12 month contracts were only met with offers from a single provider further highlighted the state of the industry at present.

Looking to 2017 and the expected continuation of price variation and volatility, understanding and anticipating the impact of key market fundamental risk factors is critical to restrict your energy price increase:

Please contact our Energy Markets team for advice on the right risk assessment approach for your business and the contracting options available to you.

1.   The Australian | Today in SA: blackout cost $367m but could have been worse