As published by RenewEconomy

In the first paper of this series we looked at the decarbonisation of electricity generation in Australia and the clear, compelling economics in support of renewable sources. What we see is that ‘business as usual’ will result in the replacement of retiring coal fired assets with low cost renewable alternatives[1]. However recent concerns about the reliability of Australia’s electricity system given the ever higher penetration of solar and wind generation has led to calls for support for traditional ‘dispatchable’ generation - namely coal- and gas-fired power stations – to ‘firm’ the renewable generators. This concern is best reflected in the most recent policy development – the National Energy Guarantee (NEG), with its call for guaranteed purchases of dispatchable generation. While dispatchable generation could include pumped hydro or battery storage, the most likely options would be gas-fired generators at least in the short term.

However, requiring the purchase of electricity from dispatchable generators breaks both rules of ‘zero emissions power generation 101’. It leaves Australia with residual emissions after 2050 from the remaining coal fired power stations (12MT CO2-e) and the currently existing and new gas-fired generators (48MT CO2-e).

In this paper, we consider the question of firming renewable generation over an extended period when ‘the sun doesn’t shine, and the wind doesn’t blow’. The experience of the Tesla battery in South Australia[2] has provided evidence that batteries can ensure system security and reliability in the face of generator failures such as a sudden shutdown of a coal-fired generator, or the passing of clouds over a solar PV array. Further, a recent study[3] that looked at Ireland’s electricity system demonstrated that batteries could stabilise a grid in a more cost effective manner compared to gas turbines.

However, the greater challenge is dealing with the loss of renewable generation capacity over a longer period that compromises resource adequacy and capability. In these circumstances, the volume of energy that must be stored in batteries or in pumped hydro dams is significantly larger. 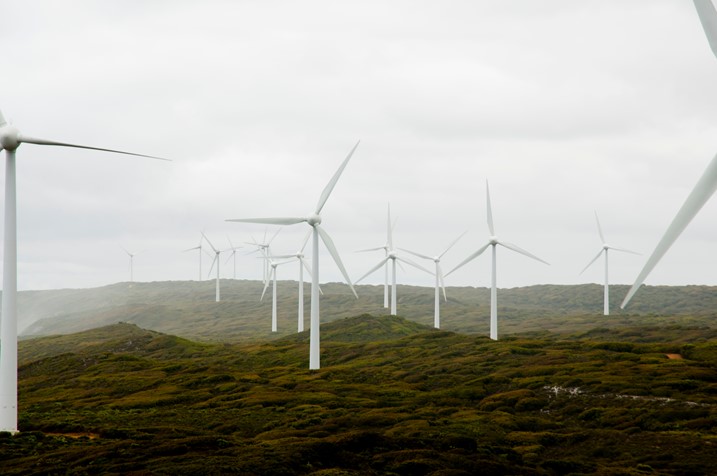 Modelling demand, supply and firming in a renewable energy zone

To explore the question of firming over longer periods, we constructed a model of a simple network consisting of two regional demand centres, separate dispatchable generators to supply the regions, and three renewable energy zones (REZ). The figure shows the configuration of the system. The two demand profiles were derived from actual system demands in the NEM.  The wind and solar profiles for the REZ were based on actual weather patterns in three sites spanning Queensland, NSW and South Australia.

We sought to determine the volume of dispatchable generation required to meet demand given actual output of wind and solar farms in the three REZ. We sized the wind and solar farms to minimise the overall cost of power generation. The overall cost of the system included the capital costs for the wind, solar, gas fired generators as well as the costs to run the gas-fired generators.

Table 1 shows the results of the optimisations for two scenarios.

The first scenario had only weak interconnections between the two demand centres and the REZ, restricting the contribution that the REZ could make to meet demand. Further, the link between the two demand centres was limited. This scenario largely reflects the current NEM, with its limited intra-state interconnections and its focus on transmission from the large coal-fired power stations rather than the more remote renewable generators. The second scenario has much stronger links between the nodes in the network[4].

Two features stand out. First, the percentage of electricity supplied by the renewable generators is very high[5]. Secondly, strengthening the interconnections provides more options for the distribution of renewable generation and for optimising wind and solar resources. 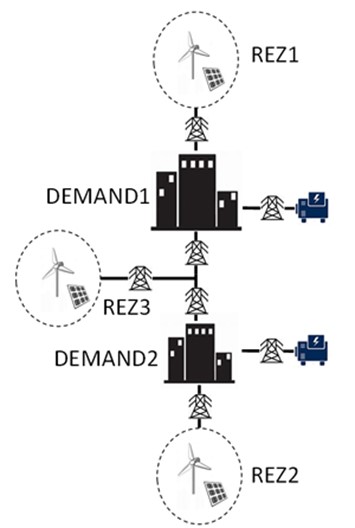 The modelling suggests that the use of both wind and solar generators in locations with good resources and the installation of interconnections to allow renewable energy zones to support each other, will result in low-cost variable renewable generators meeting the bulk of electricity demand.

Is the key to realising high penetration of variable renewables a transmission system that is designed to support distributed generation?

AEMO’s draft Integrated System Plan asks how large-scale renewable generation in targeted zones could provide an efficient solution for future power systems in Australia[6]. The draft ISP proposes renewable energy zones that are distributed throughout the NEM, as seen in Figure 2. Table 2 shows some of the correlations between wind resources, based on data from the Bureau of Meteorology for weather stations near the renewable energy zones. Values at or below zero indicate that the wind resources are not strongly correlated. With the wind therefore likely to be blowing at different times, they should be able to ‘firm’ each other provided the network can support the transmission of power.

The conclusion? Distributed renewable energy zones with weak correlations, supported by a robust transmission network as flagged in AEMO’s draft ISP, offer a path to the effective deployment of renewable energy across Australia. 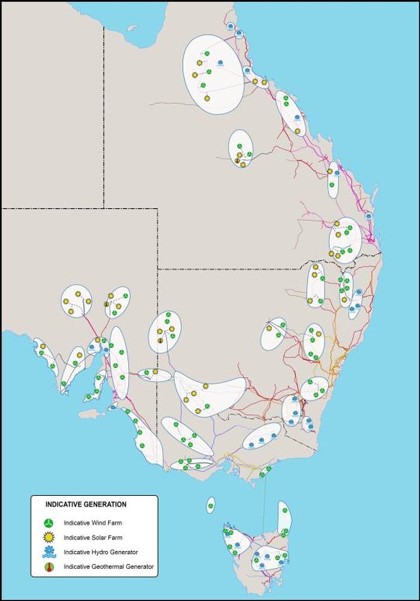 This is the role of storage for energy shifting rather than storage for grid stability. Additional storage could provide coverage. The results of a simple network model suggest roughly one day out of 10 there will be a shortfall in renewable energy for more than 12 hours of average demand.

The provision of sufficient storage to supply 12 hours of average demand would allow the renewable energy penetration to exceed 90%.

This storage could come from a number of sources: the underutilised battery capacity of electric vehicles, behind the meter storage in houses and commercial premises, utility scale batteries such as the Tesla battery in SA and large scale pumped hydro operations such as the proposed Snowy 2 system.

Back to ‘Zero emissions power generation 101’

To revisit my opening statements about the policy settings needed for zero emissions, we now have a third point. “Decarbonisation of the electricity sector needs policy makers to implement policies that:

We look at the implications of these three requirements in the final paper in the series.

[1] The new economic realities of renewable energy costs were described together with examples of markets where the trans-formation to large scale renewable energy is underway, in a recent paper by the Institute for Energy Economics and Fi-nancial Analysis (IEEFA)

[4] All the data and assumptions used in the model are available on the Energetics website. The levelised cost of electricity (LCOE) does not include the cost of any additional transmission infrastructure.

[5] Note that we have assumed that short term (battery) storage is available to stabilise the network.