What does the decade hold for the development of a hydrogen industry in Australia?
Date
January 2020
Author
Bahador Tari

The concept of a ‘hydrogen economy’ is experiencing a renaissance as a result of a global drive for a more sustainable fuel. The recently released ‘National Hydrogen Strategy’ (the Strategy), outlines a pathway to position Australia as a global leader in hydrogen by 2030.

In this article we consider the features of the Strategy including; the outlook for hydrogen over the coming decade and the developments that businesses should watch in the commercial application of this fuel source.

An industry in its infancy

As an energy carrier, a clean burning fuel and given its synergy with renewable energy generation, hydrogen is expected to play an important role in future sustainable energy systems. Australia is in a strong position to capitalise on the growing demand for hydrogen for several reasons. These reasons include our expertise, export infrastructure (as a major energy exporter), proximity to emerging hydrogen import markets in Asia, established regional trading relationships (including LNG import markets) and growing renewable energy generation capacity which can support ‘green’ hydrogen generation.

However, the development of Australia’s hydrogen industry requires all levels of government to set the right policy and regulatory environment for investments, as well as provide incentives to accelerate industry developments and promote further innovation and technology advancement.

Investment to date, predominantly through ARENA, has been directed at ‘green’ hydrogen (produced from renewable energy) R&D, feasibility studies and demonstration scale projects.

Several states, including Queensland and South Australia, have committed to hydrogen strategies. They are designed to foster innovation through pilot projects and facilitate investment in supply chain infrastructure. For states and territories with a net zero target, such as NSW and the ACT, the transition to hydrogen provides an opportunity to decarbonise the gas network and support zero emissions transport. 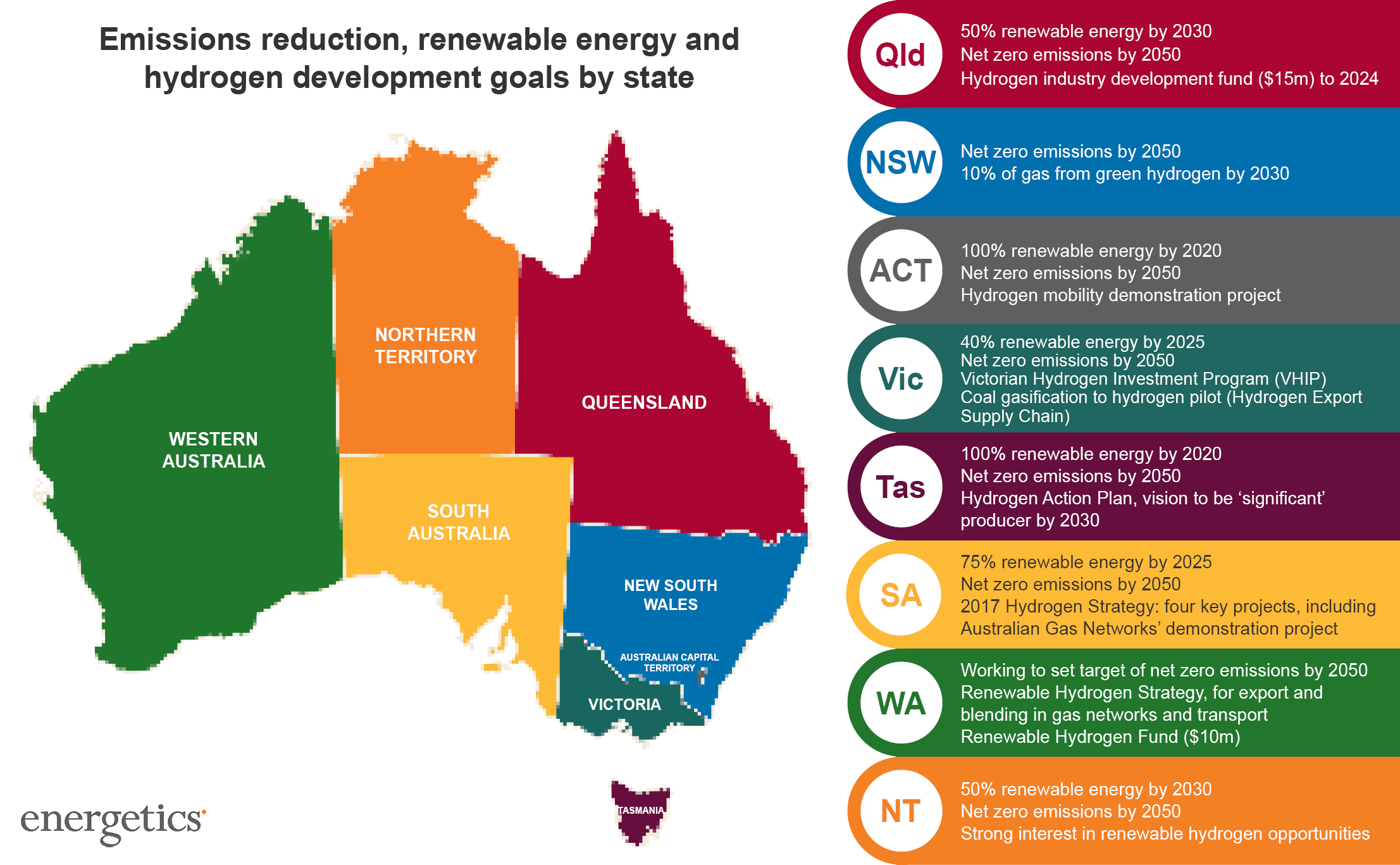 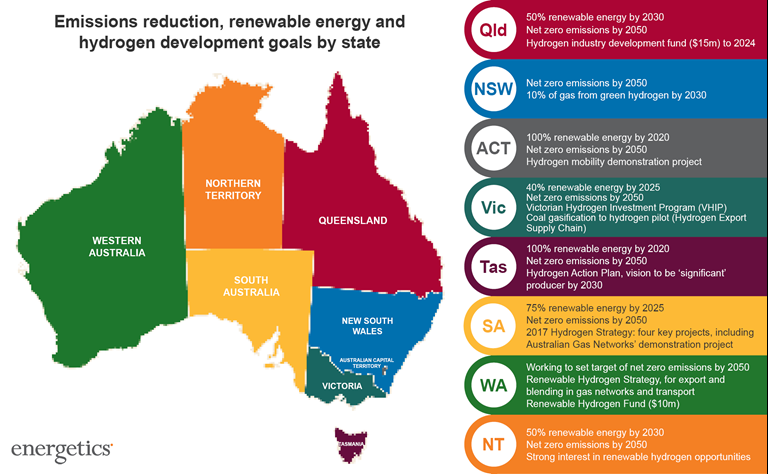 The National Hydrogen Strategy: a staged approach to creating a market post-2025

With the release of the Strategy in November 2019, and the subsequent endorsement by energy ministers, we have an adaptive pathway to 2030 intended to position Australia as a global leader in hydrogen markets. A staged approach is described which is comprised of ‘foundations and demonstrations to 2025’ and ‘large-scale market activation’ (post 2025), through which the Government is hoping to achieve supply chain efficiency and scale to build a domestic market as well as establishing Australia as an export powerhouse.

The Strategy’s vision to 2030 is underpinned by up to $370 million in reserved funding from the existing allocations from the CEFC and ARENA for new hydrogen projects.

No preference given to the development of renewable hydrogen

The Strategy is broadly in line with state level initiatives to support trials and pilot projects. However, a key point of difference is its ‘technology-neutral’ position for hydrogen production, allowing for the use of coal and gas combined with carbon capture and storage in addition to renewable hydrogen generation. This is a contentious aspect of the Strategy as we have seen the ACT, for example, indicate their preference for a ‘green’ only hydrogen economy.

Ultimately, as the renewable generation pathway comes down the cost curve, the business case for fossil fuel-based hydrogen generation combined with carbon capture may become challenging. In addition, under the Strategy, the development of a hydrogen certification scheme will require project developers to demonstrate the emissions intensity of hydrogen produced in Australia, which should benefit ‘green’ hydrogen producers to position themselves with prospective customers who have environmental criteria for hydrogen usage.

Previous work by Energetics highlighted the benefits of measures to incentivise the development of a hydrogen market in Australia, particularly in relation to renewable gas opportunities, including the establishment of:

However, the 57 joint actions identified under the Strategy do not include any such uptake targets or market incentives, preferring to focus on overcoming short to medium term barriers including technology, skills, community expectations and regulatory gaps.

Given the uncertainty regarding the value proposition, particularly from a customer’s perspective, of hydrogen injection into the gas networks, the Strategy has undertaken to review the economics of blending 100% hydrogen in gas distribution networks by end of 2020.  More research is required to better understand the impacts of different levels of hydrogen blending and injection into existing gas infrastructure and the required modifications and investment.

Production and distribution infrastructure for hydrogen are capital intensive and such domestic investments are risky and difficult to justify without long-term visibility on hydrogen demand and as such a key challenge for the Federal Government is to ensure the market is there for the long term.

A key objective of the Strategy is to ensure Australia is well placed to capitalise on its experience and capability as a large-scale commodity exporter to become a global supplier of hydrogen.

Favourable export opportunity scenarios for Australia are premised on step changes in renewable hydrogen generation; the cost of electrolysers to come down the price curve by 2025, as well as access to key infrastructure, including water and transport. On that front, the Government has undertaken to develop a National Hydrogen Infrastructure Assessment by end of 2022, which would be beneficial in directing future investment.

Australia’s most likely near term export partner in Japan has provided clear targets through its 2017 Basic Hydrogen Strategy for a delivered cost of hydrogen to be US$3/kg (A$4.4/kg) by 2030 and US$1.3/kg (A$1.95/kg ) by 2050. These targets require a significant downward shift in the production costs for renewable energy in Australia in conjunction with scale-up cost efficiencies.

The development of a hydrogen industry in Australia is clearly a long-term ambition. However, where previously the discussion had barely progressed beyond the articulation of a vision, the Strategy describes the pathway and the support to come – with the backing of all state and territory governments. For business the hydrogen opportunity is one to follow, but clearly Australia’s energy markets over the 2020s will be dominated by the transition to renewables and the growth in storage capability as improvements in battery technologies continue at pace.

Energetics will continue to monitor the progress of the hydrogen sector and keep you informed of developments in emerging technologies, the opportunities that they present for business and the longer-term outlook for Australia’s energy industry.