Playing an increasing role in business strategy and planning, carbon budgets - an allowable amount of emissions within a defined time period - are used to assess regulatory, market, and reputational risks, set goals and track progress.  In this article, we provide insights for their use.

What is a carbon budget?

Most discussion of Australia’s percentage-based emission reduction targets tends not to reflect the fact that limiting global warming requires capping the total amount of greenhouse gases in the atmosphere. The total amount of emissions allowable for a given temperature target is known as a ‘carbon budget’. As with any other kind of budget, maximising the value of those allowable emissions requires attention to how, and how quickly, they are ‘spent’. Blowing through the budget too fast implies a painful and disruptive reckoning in the future; strategic conservation of emissions enables a smoother transition to a net zero-carbon economy.

While the global carbon budget has a robust scientific basis, its allocation is highly contested. Apportioning emissions to countries, sectors or companies involves economic, technological and ethical considerations.

However, the Paris Agreement has clarified key elements of national and corporate carbon budgeting. The goal of the Paris Agreement is to limit global average temperature rise to “well below” 2 degrees Celsius (2°C), and pursue a limit of 1.5°C. In response, companies and governments are increasingly developing their own 1.5-2°C carbon budgets to use as tools in scenario construction, risk assessment and strategic guidance.

Pressure to demonstrate corporate compatibility with a 1.5-2°C future is starting to come from all sides.

A global coalition of 390 investors representing over $20 trillion in funds under management has urged G20 governments to improve climate-related financial reporting frameworks, warning “If climate risks are not fully evaluated and disclosed, ill-informed investment and corporate decisions will continue to drive up the cost of the transition”. In June, the G20’s Financial Stability Board Taskforce on Climate-related Financial Disclosure (FSB TCFD) released new guidance on climate-related financial disclosure. This, though voluntary, sets a new standard for acceptable reporting.

And domestic regulators are working out their approach to the issue, with APRA announcing in February that “climate risks will become an important and explicit part of our thinking”.

All of this means that if a company doesn’t develop its own carbon budget, or its strategic response to a broader carbon budget, someone else may do it for you – and you may not like the result.

Various global carbon budgets have been calculated. Differences in their headline figures can result from the metric used (carbon or CO2 or all greenhouse gases), the time period the budget covers, and the probability of achieving the desired temperature (as well as the treatment of more complex variables such as non-CO2 warming).

A representative budget comes from the UNEP, which estimates that the world can emit around 550 gigatonnes of CO2 between 2015 and 2100 for a two-thirds probability of achieving the 2°C goal. However, the budget for achieving the 1.5C goal is less than half that amount. While the UNEP estimates that the world would need to achieve net zero CO2 by 2045-2075 (the range indicates different probabilities of the 1.5-2°C goal), even this deadline may understate the necessary rate of decline.[1]

Use of carbon budgets in scenario construction

Using a carbon budget to define emissions scenarios reveals the near-term action required to achieve desired future outcomes and how near-term decisions can open up or limit future options.

A classic example is the IEA’s 450 scenario, which is based on an energy-only budget consistent with a 50% chance of keeping temperature rise to 2°C. The transformation of the energy system required to achieve this budget is shown to be rapid and extensive, and a major change from business-as-usual trends.  Implications of this scenario are that conversely, the IEA’s INDC scenario, which is based on countries’ current emission reduction targets, allows for a more gradual energy transition. However, within the INDC scenario, the 450 scenario’s carbon budget would be blown by 2040. This shows clearly that the 2°C goal will not be achieved with countries’ current targets. Closer to home, AGL has adapted the Climate Change Authority’s national carbon budget to construct a 2°C budget for the National Electricity Market. This reveals that, assuming electricity maintains its current share of emissions, NEM emissions need to fall by more than half by 2030. This trajectory is significantly lower than in AGL’s other scenario, which is based on the national emissions target of 26-28% below 2005 levels by 2030.

Use of carbon budgets in risk assessment

The differences between 2°C-compliant and budget-blowing-BAU futures show that the 2°C transition presents major risks to a range of industries and technologies.  Few companies are likely to be immune to these risks right across their value chain; the vast majority are exposed to many types of risk at multiple points.

Recent recommendations from the G20’s FSB Taskforce on climate-related financial disclosure (FSB-TCFD) highlight the increasing pressure on companies to show they are managing climate change-related risks. A key recommendation from the Taskforce is for companies to disclose the resilience of their strategies to 2°C or lower scenarios.

Already external organisations are assessing industries and companies against sectoral carbon budgets. For example, new analysis from Carbon Tracker, UNPRI and a number of leading institutional investors uses an oil and gas demand scenario derived from the IEA’s 450 scenario to examine 69 oil and gas companies’ capex exposure to the 2°C goal. This report finds that around one-third of potential capex to 2025 (around US$2.3 trillion) would be unneeded in a world aiming for a 50% chance of achieving the 2°C goal, with companies’ exposure to the 2°C scenario ranging from 10-60% of their potential capex. This sort of analysis can certainly be challenged, but it enables investors and activists to work out where to apply pressure.

While several Australian companies have undertaken 2°C scenario analysis (Westpac, Santos) and many more intend to (Woodside, Oil Search), so far only BHP and AGL have published details of the scenarios they used. 2°C scenarios can of course vary widely, as they are most useful when tailored to the company, but the bottom line of a robust 2°C scenario is its compliance with a plausible carbon budget.

Slicing up a carbon budget into manageable chunks makes it more relevant for near-term decisions and measurement of progress.

For example, the United Kingdom uses a series of five-year carbon budgets to track progress toward its national emissions reduction objectives (to reduce emissions by at least 80% below 1990 levels by 2050 and contribute to global emissions reductions to achieve the 2°C goal). Sectoral decarbonisation plans and policy settings can then be adjusted to ensure the budgets are met.

The UK is currently in the second carbon budget period (2013-17), and is on track to outperform its second and third budgets. However, analysis by the UK Climate Change Committee finds that the country is not on track to meet the fourth carbon budget (see Figure 4 below), and new policy settings are needed to increase the rate of annual emissions reduction to 3%.

This approach should be taken up by Australian governments. This would provide greater robustness and transparency to domestic climate and energy policy settings. 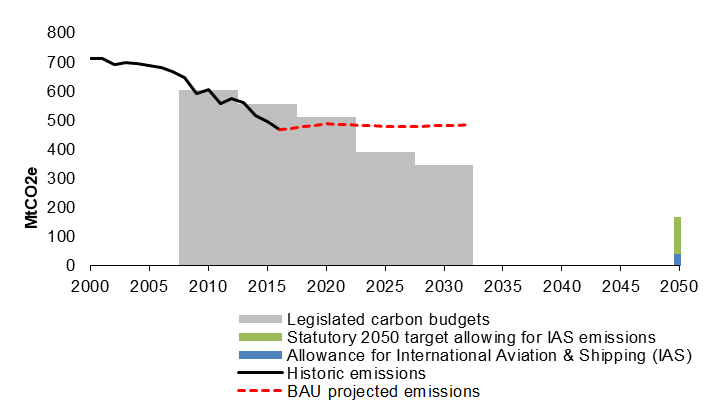 Companies can develop their own carbon budgets through the Science Based Targets Initiative. Leading Australian companies are among the nearly 300 that have signed up to the Initiative. Signatories commit to develop science-based emissions reduction targets (SBTs) to ensure that corporate decision-making is aligned with climate science and the global 2°C effort.  SBTs provide a verifiable way to assess whether a company is making a genuine and defensible contribution to global emissions reductions. Adherence to SBTs should also avoid greater future costs should urgent action be required to drive deeper cuts. The figure below outlines the potential for a company of setting (and sticking to) an SBT. 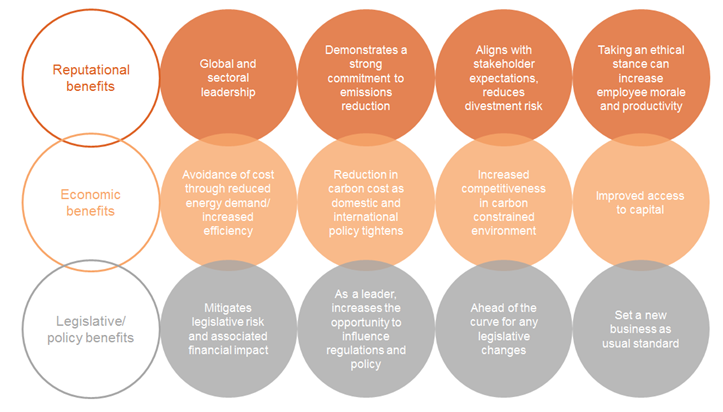 SBTs are calculated for 5-15 year periods. There are seven methods for calculating an SBT but all are based on approaches to allocation of the global carbon budget:

As a building block of climate risk management, getting to grips with carbon budgeting is fast becoming a necessity.

Energetics can assist with strategy development informed by key elements such as carbon budgeting, science based targets, scenario construction and risk identification and assessment.

[1] This timeframe assumes that the world can achieve net negative emissions later in the century. And while it is also based on the best science currently available, further global warming and further scientific progress may reveal greater climatic sensitivity.