It was a great privilege to be able to attend the Bonn meeting of the UNFCCC in May as Sustainable Business Australia’s ‘BINGO’ (which stands for ‘Business and Industry NGO’) observer on the TEC sub-committee on Innovation and Research, Development and Deployment. The UNFCCC meeting was essentially focussed on further developing the rule book whereby the Paris Climate Agreement will be delivered.

In my role representing business as an observer through Sustainable Business Australia and the World Business Council for Sustainable Development, I learned a great deal about this extraordinary process and the people within it. I was lucky enough to attend the first meeting of the parties at which all chairs were asked to open their sessions to Observers.

In this article I will share some of my insights.

Progressing the Paris Climate Agreement: insights and implications for business. Firstly, there are a number points that Australian business can draw from the Climate Conference and its sessions.

My message to Australian business

To explain the insights above, my commentary on the major aspects of the Conference follows.

Momentum and ambition: the Paris Agreement is unstoppable

While smaller than the large COPs attended by presidents and dignitaries which are held every two years (the most recent was in Paris at the end of 2015), it is still a meeting of significant magnitude and much gravity. There are a lot of people working very hard to move the historic Paris Agreement forward, all paying careful attention to the interests of their constituencies, most trying to find the best way to achieve resolution.

The first and most significant aspect of the meeting for me was the momentum that has built up in these negotiations over time. These processes date back more than two decades, to before the agreement reached at Kyoto in 1997 and the language used by the negotiators is an obscure combination of linguistic shorthand and paragraph numbers. This group of people has been talking about this content for so long it has a life if its own. This is backed up by the UNFCCC itself, a secretariat of the UN which employs over 500 people representing more than 100 countries.

While the processes of diplomacy are slow, they are indefatigable. The climate convention has a momentum that will not be slowed by one person no matter how powerful. As long as sufficient parties have ratified the Paris Agreement (55 are required, Georgia became the 145th country to ratify while I was in Bonn), and it covers the required 55% percent of global emissions, it will continue to progress, to the detriment of parties who are not directly involved.

There is an interesting tension around the role of the private sector in enabling countries to meet their NDCs and additional high ambition targets, and concerns about entrenched views undermining the negotiation process. To simplify this, the general consensus is that government monies alone will not be enough to deliver necessary emissions reductions, and that private sector money will be required too. At the same time, there is deep seated mistrust of particularly the potential of the fossil fuel sector to derail climate negotiations.

This was played out for me personally when I chose to attend a session on market mechanisms under the Paris Agreement. Venezuela representing the Least Developed Countries objected to the presence of the observers based on the potential for the observer pool to be impacted by the presence of people with vested interests in the fossil fuel industry and the session was closed immediately. While I was leaving I heard statements from more than ten countries stressing the role of the private sector in delivering emissions reductions.

While even one country is concerned about the value sets of the observers, we will be excluded from sessions. However, throughout the meeting I was reminded that the majority of the negotiators are bureaucrats who are not well-versed with the private sector, and they are more accustomed to regulating it, rather than co-operating with it. Globally progress on emissions reductions will be served by working through this impasse and ensuring that the two financial groups – government and the private sector – work effectively together to ensure efficient investment in improvements. 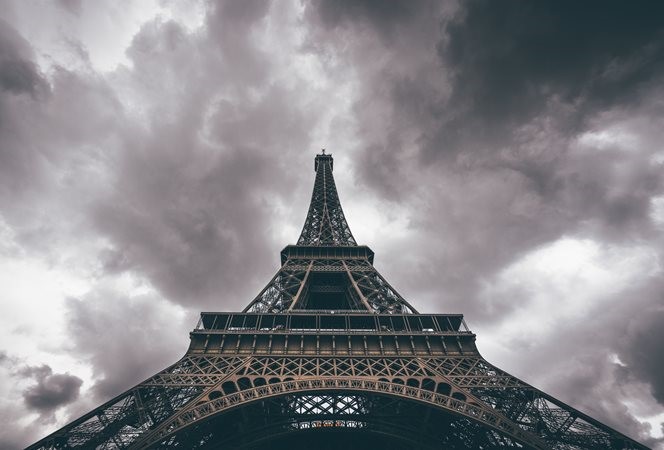 The conference brought home to me the challenging role that agriculture will play in meeting global emissions reductions. Again it was often stated “We won’t meet 2 degree emissions reductions without the agriculture sector”. The challenge for the sector is that it is at the nexus of both mitigation through changing farming practises, and adaptation, as it is one of the sectors which will be most profoundly impacted by climate change.

Another challenge for the sector is the undercurrent of concern from numerous observer groups about monoculture and the intensive farming contributing to unsustainable practises.

It will be interesting to see what the sector morphs into by 2050.  The role of mobile technology and data in supporting farmers in remote areas of developing countries will drive considerable change.

Innovation is a core concept in many aspects of the UNFCCC as it works to deliver the Paris rule book. It is the central theme of a number of committees and sub-committees and was the theme of a special event hosted by the TEC during the Bonn meeting. The expectation is that innovation will enable us to meet a 2 degree, or even 1.5 degree target by 2050.

What is interesting about the innovation debate is that technical innovation seems to be the easy part. The innovation cycle from concept to delivery is understood and supported to some degree at least. What needs additional attention is innovation in policy, and innovation in business models which is linked to innovation in financing. This is going to be the interface of much of the influence of the private sector in meeting emissions reduction targets.

While information on the funding of innovation is limited, the current understanding is that public and private sector funding of innovation are equally important. To support the release of private monies, governments need to deliver policy certainty first and innovative policy second. To ensure profitability of companies exploiting innovation, they will need to innovate in their business models. Financiers need to be willing to consider innovative models, and work out different approaches to financing programs.

The technology innovation challenge is not trivial, but is the easiest to solve. In order to achieve cost effective emissions reductions in a timely fashion we require innovation in business models, financing structures and policy; these are not mutually exclusive, successful delivery will result from all of these being developed in concert. 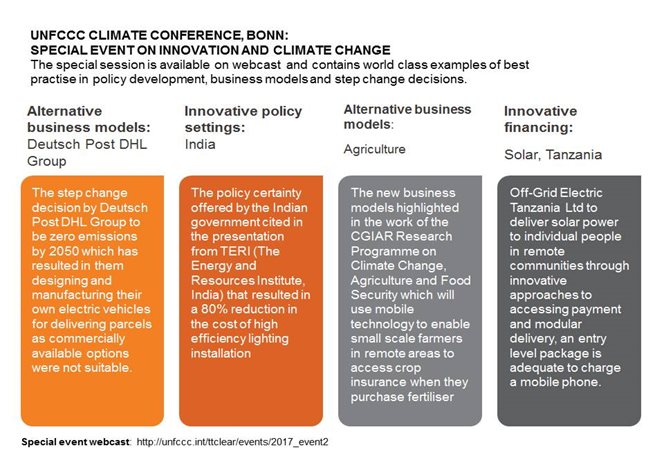 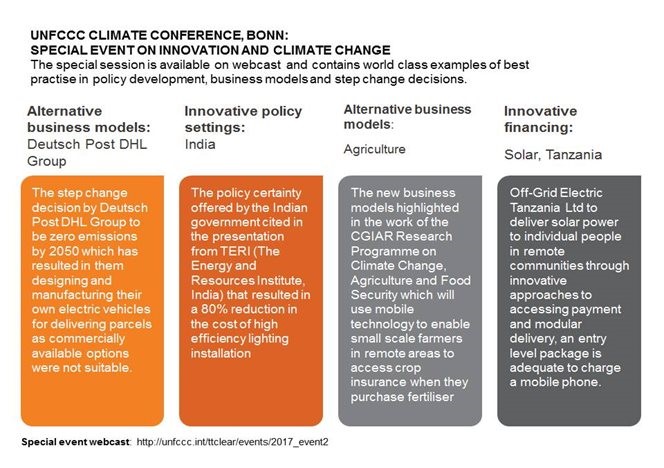 Sustainable Development Goals (SDGs): focus is growing on their achievement in parallel to emissions reductions

A strong theme running through many sessions was the parallel paths of the implementation of the Paris Agreement and ensuring parties address the SDGs. As we at Energetics know, energy and climate change (other than water in some instances) are the environmental aspects for which it is easiest to build a business case for change. Energy and climate change strategies often play a pivotal role in anchoring the sustainability practises of a company.
In the same way the activities of the UNFCCC are enablers for countries to achieve broader SDG outcomes. The representation from the United Nations Environment Program (UNEP) at the conference was noticeable as were the many reference to SDGs and the role that the Paris Agreement will play in assisting countries to meet these.

These are just some of the many areas where I learned so much. The role of indigenous people, women and the youth in enabling countries to meet their NDCs is receiving increasing attention to the benefit of all. I sat in a session on the outcomes of the review of an aspect of the Clean Development Mechanism (CDM) which has been going on for five years. The frustration of the negotiators at their own lack of progress was tangible. At the same time no one wanted to give up on the good work of years because of disagreement about a few paragraphs. I think it was this session that, in a contradictory fashion, gave me the most hope for the future of the Paris Agreement. While the parties to the Agreement will never all agree, all of the negotiators want this to work. I left convinced that they will push forward.

If you are interested to read more details on the outcomes of the Conference and the progress of negotiations, the World Resources Institute provides an excellent summary.