The market for corporate renewable power purchase agreements (PPAs) has developed at a remarkable pace.  From 2017 when electricity and LGC prices skyrocketed, sparking the interest of energy users who sought greater control over their energy costs, corporate PPAs have supported projects with a combined capacity of nearly 3600MW[1]. Around 3000MW of this capacity enabled investment in new projects. With the new year well underway, interest in corporate renewable PPAs is running high. So, what does 2019 hold for Australia’s renewable energy market? This article looks at the trends that are likely to shape this part of our energy landscape. 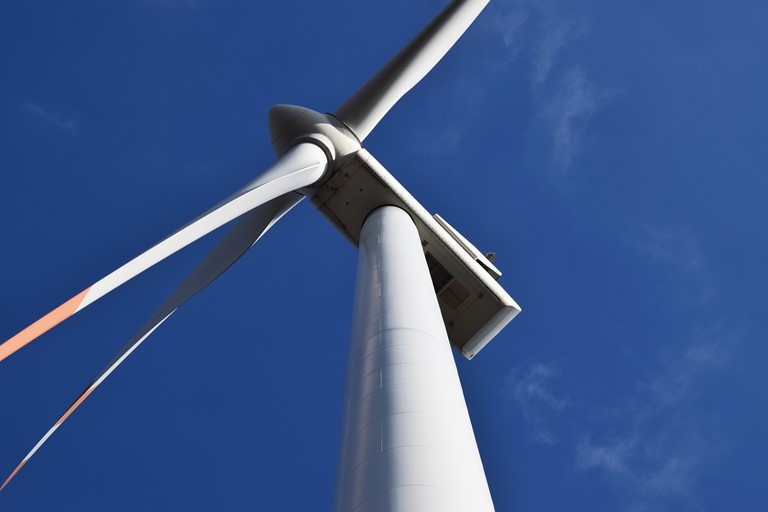 Two years ago, when interest in corporate PPAs began to take off, most energy retailers chose to ‘watch the game from the sidelines’. This contrasted sharply with renewable energy generators who saw the opportunity to breathe new life into their industry following the drawn-out review of the Renewable Energy Target which had brought new investment to a virtual standstill for more than a year. Generators also saw the benefit of contracting with corporates which typically had a better credit risk profile than most electricity retailers.

However, renewable energy generators showed little appreciation for the distinctly different risk appetite of large energy users, as compared to electricity retailers: their traditional go-to source for long term PPAs. Most expected corporates to just accept the PPA terms used by electricity retailers which have large, diversified generation portfolios, or the sorts of terms that featured in the ACT Government's deal in 2016 for which the primary aim was to stimulate investment in renewables. Although at this early stage in the market’s development, few energy users could comprehend the array of risk transfer arrangements that sat behind the headline PPA prices seen in the media.

What developed was a market that lacked competition from credible offers and transactions that often took a long time to get off the ground. Contract models and terms had to be developed from scratch to ensure alignment with Australian market conventions and to reflect the optimal allocation of risk between the parties; noting the corporate’s desire to self-hedge its electricity market exposure. Needless to say, this drove up transaction costs and many corporate PPAs did not proceed.

Lessons learned back then, deliver benefits to market newcomers today

Fast forward to the start of 2019 and large energy users that are planning to engage with the complex world of managing electricity market risk exposure through corporate PPAs can refer to peers in close to 80 organisations that have concluded about 30 corporate PPAs (see our deal tracker[2]). A number of these PPAs have already begun commercial operation, including the Melbourne Renewable Energy Buying Group, with its members reaping the benefits of the Crowlands Wind Farm coming on-line. The City of Melbourne which led this group announced that it had achieved its ambition of 100% renewable electricity supply in January[3].

While many PPAs are with new projects, transactions with existing facilities are on the rise, enabling energy users to access the market more quickly[4]. Nationally, approximately 50% of the project capacity supported by corporate PPAs is solar, 9% is a mix of wind and solar, and the remainder is wind.  Existing facilities can offer shorter tenure as compared to those still under development. 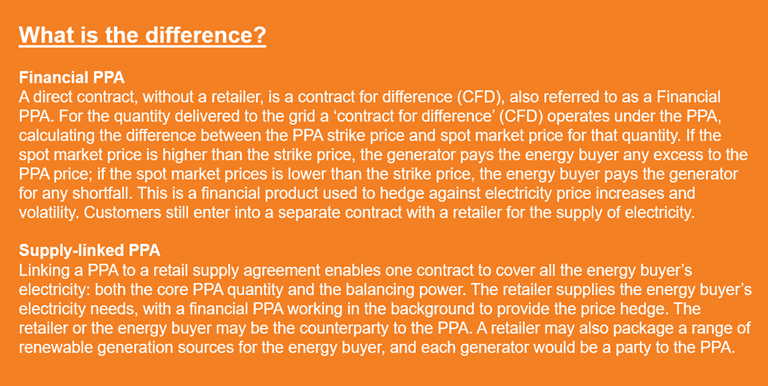 While most of the early corporate PPA transactions were financial PPAs (e.g. Telstra, SMNW, Telstra Club) and large behind the meter systems (i.e. Sun Metals and Nectar Farms), we are now observing a growing interest amongst electricity retailers in engaging in PPAs both large and small.

As illustrated below, PPAs concluded with the involvement of a retailer (i.e. supply linked PPAs[5]) are now the dominant contract model category. 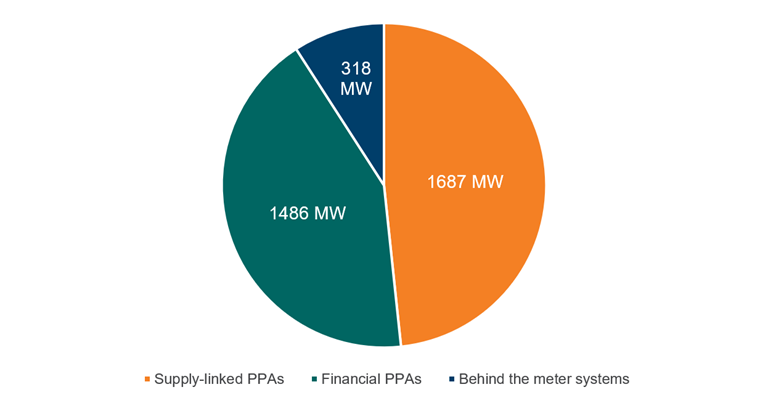 The University of New South Wales and Origin Energy arrangement; as well as the Pacific Hydro / Tango offer to the Melbourne Renewable Energy Buying Group are discussed in the recently published NSW Corporate PPA Guide. Retailer RedEnergy also recently launched its corporate PPA offer and concluded an agreement with Dexus. At the smaller end of the corporate market Flow Power has concluded numerous deals, many with industrial food processors.

The models used by these retailers are diverse. Each has a very different market risk profile and tenure, ranging from seven to 15 years. In short, around 10 retailers are offering compelling supply linked PPA offers, however we are some way off seeing a ‘standard’ offer out in the market.

Amongst renewable energy generators, the market is diverging with more sophisticated generators now showing awareness of the risk appetite of corporates. A growing number also offer ‘firmed’ products, which smooth out the intermittency associated with wind and solar production and go some way towards reducing the risks associated with volume of energy contracted and its time of use. This generally offers clear benefits to energy users, especially if they hope to engage a retailer in managing the contracted generation as part of a supply-linked PPA.

When contracting directly with a renewable energy generator, the overwhelming majority still have a strong preference for a tenure of at least 10 years.  That said, we saw in late 2018 a retailer market-test a very short term financial PPA.

Clearly, these de-risking strategies for shorter tenure, firmed financial PPAs and supply linked PPAs are inevitably priced at a premium. As the market matures and competition increases, we should see these premiums reduce.

What should a large energy user consider in 2019 when exploring the corporate PPA opportunity for their business?

Electricity and environmental markets provide the pitch on which the corporate PPA game plays out. Familiarising yourself with the dynamics of these markets and the forces shaping them over the next decade and beyond is essential to inform your selection of the optimal contracting model, pricing model and tenure; and ultimately PPA supplier.

Australia is only at the start of what is an unprecedented transformation of its energy system both in terms of scale and pace. In such a dynamic and innovative market, energy users must consider their options carefully and in view of the following, anticipated developments:

To unlock value on a sustained basis, energy users must develop an overarching strategy that considers two elements:

Looking to 2019 and beyond, the core corporate drivers of achieving cost reductions, minimising exposure to energy market volatility and reducing greenhouse emissions, in our assessment, will persist as corporates continue to grapple with a volatile electricity market in transition.

While more corporate deals are set to be concluded over 2019, these deals on aggregate may be smaller, with a continued shift towards supply-linked PPAs with new and existing generators; and possibly ‘firmed’ financial PPAs. Larger transactions will be supported by organisations with a net zero emissions goals, seizing the opportunity presented by the fall in LGC prices to achieve the dual goals of managing electricity costs down and affordable emissions reduction. For these organisations, a LGC-only or a bundled power and LGC-offtake through a corporate PPAs is a cost-effective strategy, buying them time to pursue other measures that can transform their emissions profile into the long term.

Our message to large energy users considering the corporate PPA opportunity? Ultimately, it’s about taking control of your energy spend.  No one has to be a passive price taker.

Energetics is an Australian market leader in corporate PPAs, having acted as energy markets, commercial and technical adviser to six organisations that successfully concluded PPAs to date, with many more transactions in various stages of consideration. Please contact any one of our experts for more information.

[4] Behind the meter facilities included here are Sun Metals and Nectar Farms, both >100MW each (i.e. large utility scale systems connected by private wires and therefore included in this analysis)

[5] Refer to the NSW Corporate PPA Guide developed by Energetics and Norton Rose Fulbright for a description of the different contract models.