What can Blockchain technology bring to the electricity grid of the future?
Date
January 2018
Author
Rob Rouwette

Blockchain is disrupting our financial systems with the rise of cryptocurrencies like Bitcoin. It is being heralded as "the foundation of the Internet of Value"[1]. The decentralised, secure nature of blockchain makes it highly useful for recording transactions, and eliminates the need for a trusted party to facilitate digital relationships. It is seen as a potential backbone for a transaction layer for the Internet, yet how does this impact conventional business models? Furthermore, what impact will it have on our energy systems? Will a distributed ledger alter how we create, purchase and use energy? What impact, it any, could it have on emissions?

In this article, Energetics’ reviews the current thinking around the potential impacts of blockchain in the context of Australia’s changing energy mix. 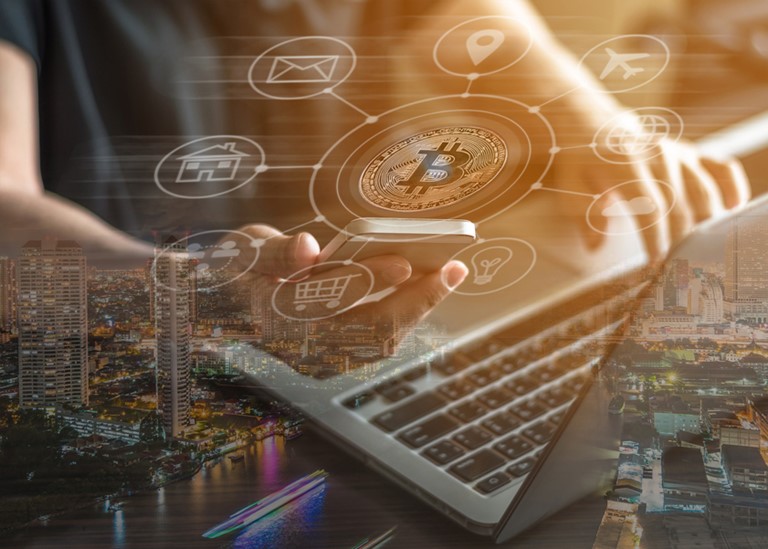 What is the role of blockchain in peer-to-peer trading?

Imagine a time when every resource can become a service that is dynamically traded on an open market. Your solar panels, home battery storage and electric vehicle all communicate with each other and with smart appliances such as thermostats, air conditioners, fridges, dishwashers and washing machines. The ‘chatter’ is not only in your home but also in your neighbourhood, precinct and city, with the purpose of finding the optimum (lowest cost) energy behaviours.  The Internet-of-Things (IoT) enables the scaling of a peer-to-peer (P2P) economy.

With this technological capability we see a platform for innovative business models to emerge. The IoT has made the P2P model more viable and lately, cryptocurrencies are some of the most talked about exponents of the virtualisation of the economy. Virtual currencies are not created by a central banking authority; instead, the creation of new currency and the recording of transactions between parties is managed in a decentralised manner, for example through a blockchain.

What impact will peer-to-peer trading have on electricity markets?

In the current electricity market, consumers are connected to producers through retailers. If you have solar panels on your roof and are generating excess electricity, you cannot sell this electricity directly to your neighbour. Instead, both parties need to go through a retailer in order to trade. With the number of prosumers (a person who both consumes and produces items such as electricity) increasing as more people install solar panels, this trading principle is coming under pressure due to the inherent inefficiency and associated cost of transactions. P2P trading is a logical development, and it appears to be within reach with the emergence of a new communication and transaction framework.

Furthermore, what will really drive the need for the ‘grid-of-the-future’ is the increased share of intermittent (renewable) energy sources combined with a large number of smart appliances and small-scale electricity storage units that will undoubtedly become part of the building landscape in the next decade. The IoT has the potential to be the backbone of a smart grid, creating a much more efficient system where demand and supply of electricity are matched through artificial intelligence (AI) and micro-transactions. Traditional energy retailers will have to adapt their business models in order to be profitable in this new environment.

As the ‘grid-of-the-future’ becomes more intelligent and increasingly efficient at utilising resources distributed across the network, the current regulatory models for funding the operational and capital expenditure on distribution and transmission networks will need to adapt to fully enable these benefits. Under a highly distributed model the ‘grid-of-the-future’ is poised to experience growing pains similar to the current rebalancing of large scale generation sources and maintenance of system security. The concentration and nature of the ownership of these network resources presents a significant challenge to establishing an appropriate regulatory framework.

What is the impact of blockchain and peer-to-peer trading on greenhouse gas emissions?

In order for blockchain technology to be useful in the context of a smart grid, it needs to be able to handle a high volume of micro-transactions in real-time. For example, the algorithm that underpins the Bitcoin system requires vast quantities of computational power, making it incredibly power-hungry and unsuitable for running the transactions in a smart grid. However, there are already various other cryptocurrencies or virtual tokens either in existence or under development that are much more energy efficient. It can be expected that the energy required for running the system will only be a fraction of the total energy that is traded, and thus the additional emissions will be quite small.

More importantly, creating a smart system allows us to make better use of available (intermittent) resources, predict behaviour (supply and demand) and transact energy accordingly. As a result, distributed ledgers enable the grid of the future with high penetration of renewables and millions of prosumers active in P2P trading.

So it appears that the contribution to emission reductions is more likely to be indirect. What should be more significant is the pricing mechanism that peer-to-peer trading enables which could accelerate the transition to renewables and batteries.

In conclusion, there is not a simple answer to the question of whether blockchain-enabled P2P trading of electricity will result in emissions reductions, rather that the impact will be indirect by enhancing the business case for small-scale solar PV and batteries.

[1] CoinDesk | What is blockchain technology?