Receiving extensive media coverage, the economic modelling showed that $63 billion in new investment opportunities could be created over the next five years with the strengthening of federal climate targets and policies in keeping with the achievement of net zero emissions by the middle of the century. The analysis also found that under this scenario private investment would accelerate out to 2050, with hundreds of billions of dollars in opportunities created across renewable energy, green hydrogen, manufacturing, electrified transport and carbon sequestration.

It is also worth noting that the analysis did not include investments in assets geared towards export. Estimates are therefore on the conservative side when compared to the opportunities that could arise for products like such as green hydrogen and green steel.

IGCC CEO, Emma Herd said, “If we get this right, Australia could reap the benefits of $63 billion in fresh private investment over the next five years, and over $1 trillion by mid-century, in domestic opportunities alone. If we continue as we are, we’ll leave billions of dollars in investment opportunities behind."

“The billions of dollars in investment opportunities associated with an orderly transition to net zero emissions would support the jobs, livelihoods and wealth of millions of Australians for decades to come."

“Many of these prospects are in regional Australia with multi-billion-dollar opportunities in carbon farming, renewable energy, transport infrastructure and advanced manufacturing." 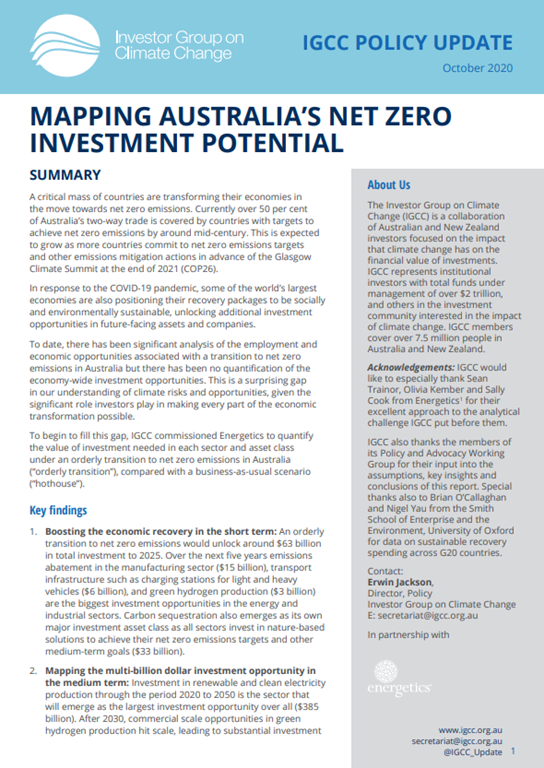