This article was originally published in the Australian Institute of Energy’s Q4 2020 Energy News.

“The recent fires have destroyed more than 5,000 power poles across Victoria and NSW and entire sections of electricity networks are being rebuilt from the ground up.”

The quote, which refers to the 2020 bushfires in south eastern Australia, was taken from a media release issued by Energy Networks Australia[1]. In these bushfires and other extreme weather events, there are trends that increasingly demonstrate the influence of climate change on the earth’s systems. First, while ‘weather is not climate’, the impact of climate change is now seen through the variability of daily weather patterns.[1],[2] The ‘fingerprints’ of climate change are observable across a wide range of locations, in new weather patterns, in stressed ecosystems and in the behaviour of extreme events. Second, while climate change may not be responsible for a single event, it increases the likelihood of more extreme events.[3],[4]

In this article we explore the financial impact of climate change and how that is changing the risk profile of assets across the business community. To illustrate the risks, we consider the challenges facing Australia’s electricity transmission and distribution assets, as highlighted both here in most recent bushfire season and in the vast fires impacting California the same year. 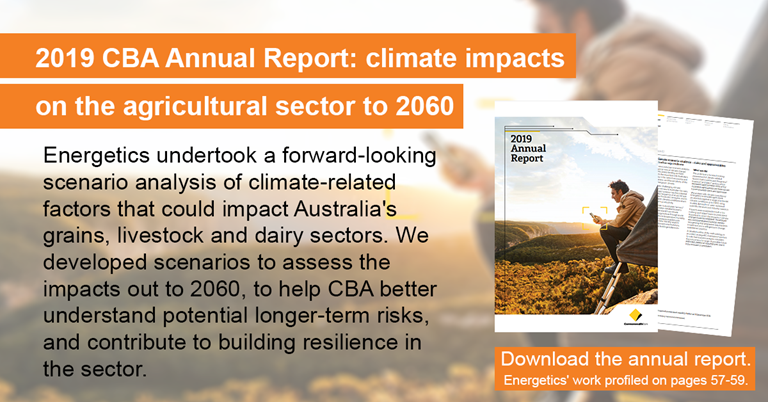 The inherent risks in a hotter, drier landscape

The combustion of fuels is responsible for around two-thirds of global greenhouse gas emissions.[5] While a fundamental shift from reliance on fossil fuels is underway it is important to note that the earth’s climate systems are already strained. There are two concerning aspects: the change in the climate that is ‘locked in’ and the ‘non-stationary’ level of emissions. The first term refers to the observation that the earth’s climate systems have a vast inertia and changes already initiated will continue for decades to come; so that some climate hazards are locked in regardless of the emissions trajectory over that time.[6] The second, is that the continuing emission of greenhouse gases over the next few decades could drive the changes where the end point becomes unknowable.[7]

In his comprehensive study of risk management[8], author Peter Bernstein argues that the notion of bringing risk under control is one of the central ideas that distinguishes modern times from the distant past. Tools exist that quantify the impact of future risks to determine the value of actions taken today. They are the basis on which insurance premiums are determined to cover a risk that may occur in one month, one year, one decade, or several decades.

However, locked-in climate change and non-stationarity undermine risk management. They define a world with climate impacts that we will not be able to quantify. This is the core of the ‘tragedy of the horizon’ as described by the former Governor of the Bank of England, Mr Mark Carney.[9] Translated into the language of a free market economy this is an investment risk; one that we can’t measure, can’t avoid[10] and can’t price. This challenge is now clearly acknowledged by the investment community, with organisations such as the Investor Group on Climate Change[11] (IGCC) looking well beyond climate change being a social licence to operate issue, to one that goes to the heart of investment management. An example is the recent report on resilient investments which examined the risks linked to physical climate change[12] and the report on requirements for full disclosure of climate risk to assets.[13]

A case in point: the risks in power transmission and distribution grids

The ‘tragedy of the horizon’ is no better reflected than in the risks associated with the operation of electricity transmission and distribution grids (T&D) in drying ecosystems. The catastrophic sub-regional firestorms as observed in Black Saturday 2009 Victoria, the 2020 south eastern Australian fires and the 2018, 2020 fires in California are brutal examples of where this nexus saw serious physical and financial consequences for the electricity utilities involved. The cost of the 2020 Californian wildfires is expected to exceed $US20 billion.[14], [15]

The electricity T&D grids make for an interesting case study for several reasons. First, they are critical infrastructure, and their failure leads to severe societal impacts. Second, they are long lived and expensive assets. Third, their risk profile is already being shaped by climate change, in some cases tragically so. Lastly, they provide a laboratory with which to illustrate many of the key principles of the model of universal investment “too slow to run, too big to hide” emerging from some of the world’s largest investment funds.

The challenge of drying ecosystems

In certain geographical locations, the impact of a changing climate is observable in ecosystems. In the case of agriculture this leads to changes in crop yields, variation in planting times and the increased need for irrigation and adaptation.[16] In the case of native flora it leads to unviable habitats and the migration of pests and diseases. The consequence of a drying signal on an area with an extensive forest ecosystem is, as we know all too well from Australia and California, the creation of excessive fuel loads (dry trees) and the emergence of extreme fire risk. We see this from only 1oC of warming.[17] There are many factors at play, including forest management, fire prevention policy and area zoning, but the fundamental cause is that the ecosystem becomes so dry that once a fire starts it cannot be contained. And that is the difference between the past and the future.

The emergence of these new extreme fire-risk ecosystems will present serious challenges to the operators of T&D grids that are located within them. It is important to note that the risks run both ways: the unstably dry ecosystems being a fire risk to the grid and the grid being a fire risk to the unstably dry ecosystem. The operators of T&D grids have a wide range of management options that can make the system both more resilient to the impact of fires and reduce the risk of the grid being the initiator of fires. However, the questions are always ‘at what cost’ and ‘who pays?’.

These questions have been raised in the US. A detailed study carried out recently by the US Environmental Protection Agency and MIT[18] concluded the following for the contiguous US, “Total infrastructure costs were found to rise considerably, with annual climate change expenditures increasing by as much as 25%. The results demonstrate that climate impacts will likely be substantial, though this analysis only captures a portion of the total potential impacts”. The authors also commented that “A major consideration in assessing the impacts of climate change on US electricity transmission and distribution infrastructure is the rate of climate change compared to the lifecycle of power system infrastructure replacement under ‘normal’ conditions.”

The study was confined to the impact of wildfires on the grid, and it did not examine the risks from the grid. It is worth nothing that the Californian utility PG&E sought bankruptcy protection from an estimated US$30 billion in wildfire liabilities arising from its conviction for unlawfully causing a fire and on 85 counts of involuntary manslaughter.[19]

The Australian bushfire experience associated with the operation of T&D grids was in the Black Saturday events in rural Victoria, February 2009. The utility Ausnet Services was found to have been negligent in the operation of a section on the powerline in Kilmore East resulting in a fire that destroyed more than 1,240 buildings and killed 120 people. The subsequent legal case was settled for $470 million (three times greater than their FY20 revenue).[20],[21]

In both the Australian and US examples the combination of a very dry ecosystem and sub-optimal grid operation resulted in the realisation of a catastrophic risk.

Energy Networks Australia (ENA) developed the Climate Risk and Resilience, Industry Guidance Manual in 2014 with the objective of assisting the network service providers to plan for the impacts of climate change. In October 2020, the Australian Energy Market Operator (AEMO) working with Bureau of Meteorology and the CSIRO, developed a series of temperature exceedance maps to assist operators understand the frequency of extremely hot days across future decades. However, the focus of both is on the management of the operation of the networks under future climate conditions and neither deal with risks posed by the grids operating in drying ecosystems.

Understanding and managing climate risks: no business is exempt

The climate-related physical risks facing T&D businesses are profound. However, while the risks in the example provided in this article both to and from transmission and distribution grids in a drying landscape are increasingly evident, all businesses need to understand how the changing climate impacts their risk profile. This is no longer an optional task, as identification and management of climate-related risk has been identified as critical to meet the due care and diligence obligations of both public and private entities.[22] Energetics encourages businesses, regardless of the sector in which they operate, to engage with Australia’s vast climate science resources as part of their climate risk assessments; especially as more companies adopt the guidance as provided by the global Financial Stability Board’s Taskforce on Climate-related Financial Disclosures (TCFD).[23] With the dual challenges of ‘locked-in’ and ‘non-stationary’ climate change, investors, insurers, regulators, customers, employees and communities will all seek insights into business’ plans for climate risk mitigation and adaptation. 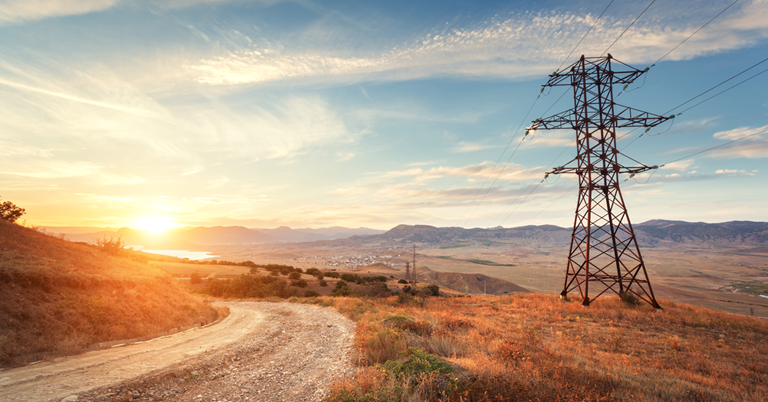 [6] NY Times | Climate Disruption Is Now Locked In. The Next Moves Will Be Crucial.

[7] Climate Campus: Climate Change in Australia, projections for Australia’s NRM regions, sources of information on the underpinning knowledge that is used when undertaking climate science research and projections.

[10] Noting that while climate risks cannot be avoided, there is an extent to which adaptation measures will enable the risks to be managed.

[16] See page 58 of the 2019 Annual Report of the Commonwealth Bank for a discussion of the physical and financial (risk) impact of climate change on Australia’s agricultural sector.

[17] Energetics | 1 degree of warming led to a bushfire catastrophe