Large-scale storage is expected to grow exponentially in the coming decades. Coupling storage with renewable energy projects is an essential part of Australia’s transition from an electricity system dominated by large, centralised synchronous thermal generators to a more distributed generation fleet with a growing proportion of variable renewable energy sources. Currently, the number of projects announced dwarf’s storage assets in operation and under construction. As seen in Figure 1, the market for storage has been buoyant in recent times. This is especially apparent following the release of Australian Energy Market Operator’s (AEMO) recent blueprint for the energy system of tomorrow, the 2020 Integrated System Plan (ISP).

Using project information sourced from Energetics’ market-leading research and AEMO’s system data, there is circa 1,671MW of operational grid-connected battery storage and pumped hydro assets in the NEM, with a further 1,020MW having met financial close or are under construction and circa 25,741MW announced or in planning. 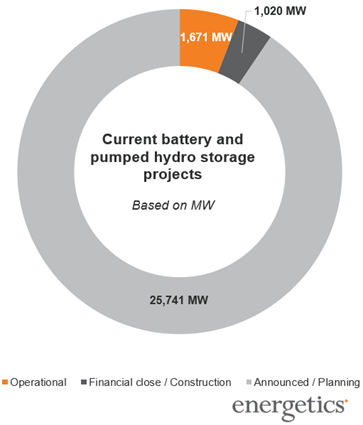 The outlook for storage: AEMO’s forecast

Based on AEMO’s 2020 ISP forecast, depending on the scenario, the NEM will need 6-19GW of new flexible, utility-scale dispatchable resources (i.e. batteries, pumped hydro and gas) to firm up the inherently variable resources. Grid scale storage is forecast to constitute up to 7.8GW of this new capacity by 2025 under the High DER (distributed energy resources) Scenario, and 13.5GW by 2030 in addition to the operational FY20 baseline of approximately 1.1GW.

At present the total capacity in operation or under construction (i.e. committed investment) comes to 1,099MW for grid-scale battery and 1.59GW for pumped hydro systems. However, when you add the new battery and pumped hydro projects announced, this pushes the total shallow, medium and deep storage capacity to circa 28GW[1].

As seen in Figure 2, AEMO's Central Scenario appears to be on track to becoming obsolete given the number of battery storage developments that have been announced. As illustrated, the current announced total of circa 28GW is far above where AEMO forecasts Australia to be by 2040 under the High DER Scenario. This highlights the immense interest in storage. However, with so many new project announcements, not all will be delivered. 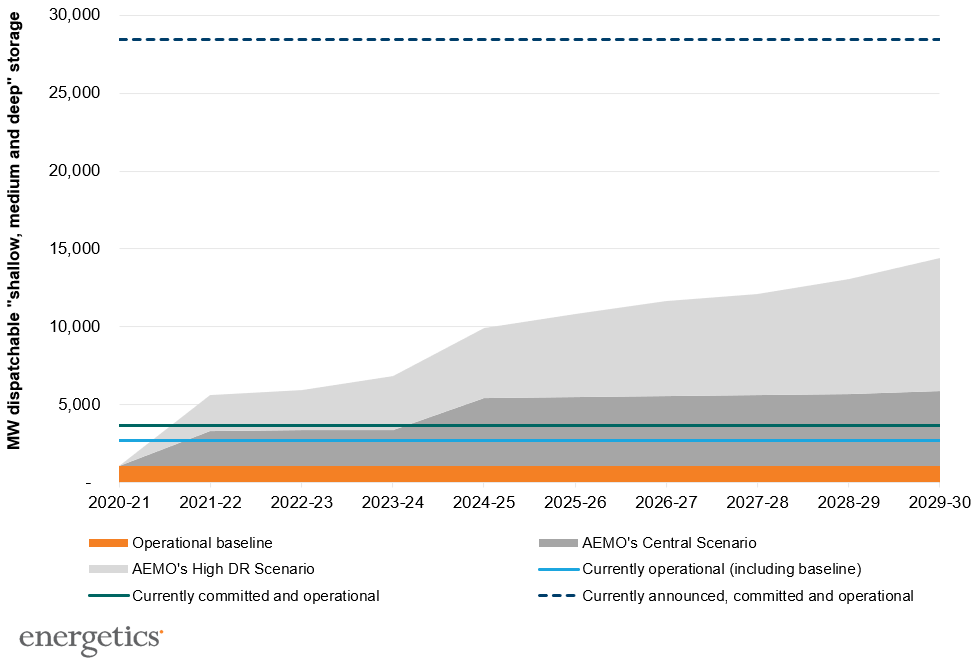 As seen in Figure 3, the Hornsdale Reserve system is the market leader amongst operational grid-scale batteries at 150MW, and an energy storage capacity of 194MWh. However, with the breaking of ground in Geelong of Neoen’s new 300MW BESS, Hornsdale is now months away from losing its title of ‘Australia’s biggest battery’. As a testament to how rapidly evolving this space is, an arms race has developed between developers, who are announcing ever larger battery systems by the week. Since late 2020, Neoen, AGL, Origin, and now CEP. Energy have all announced world-leading sized BESS’s. Neoen have announced a 500MW BESS West of Sydney, Origin and AGL plan on utilising the existing transmission infrastructure at their coal-generators, Eraring and Liddell, to build a 700MW and 500MW BESS respectively. In early February, CEP. Energy went above and beyond Australia’s large ‘gentailers’[2], announcing a world leading 1,200MW battery to be deployed in Kurri Kurri, NSW.

Taken together, all batteries either under construction or operational, average a capacity of circa 61MW. Taking the recent large projects, Hornsdale, Geelong BESS, and the Wandoan BESS out of this, the average system size is 36.6.2MW. These figures are expected to change dramatically with 50 announced battery projects with capacities 50MW or larger. 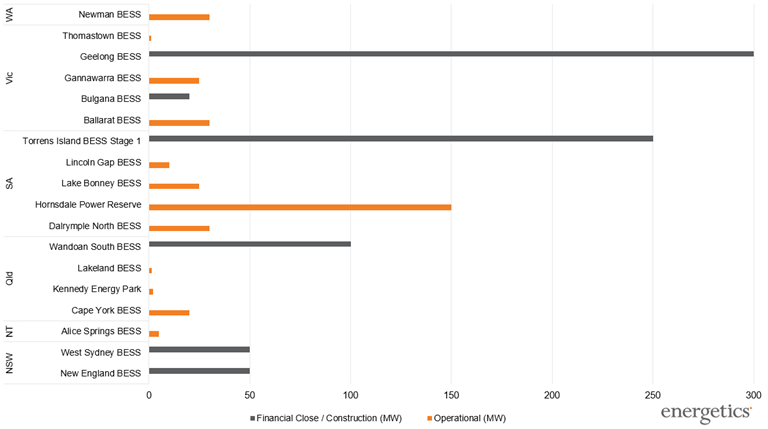 [2] The term 'gentailer' is a portmanteau word combining the terms generator. This is a reference to the vertical integration of companies operating in the NEM, where generators own a retail arm.

[3] For projects without a publicly announced MWh capacity, Energetics has assumed a conservative internationally aligned estimate of 1hr.