Will the Safeguard Mechanism grow teeth?

However, while large emitters are showing little interest in the start of the safeguard mechanism, speculation surrounds the ways in which the Safeguard Mechanism could evolve in the future.

Australia has significant international climate change commitments. Our National Determined Commitment (NDC) is to deliver 26-28% reductions on 2005 emissions levels by 2030. We are also required to make deeper cuts to meet both our obligations under the new global climate agreement of limiting warming to within 2oC on pre-industrial levels and, as a member of the ‘High Ambition Coalition’, to work towards limiting warming to within 1.5oC. We see in the Safeguard Mechanism a flexible policy option for driving Australia’s largest emitters to deliver further reductions.

Also, as we are currently in the midst of an election campaign it is worth understanding the position of the ALP. If a Labor government was elected on 2 July, there may be even more significant changes to the regulations. Labor does not support the current policy and are in favour of an emissions trading scheme. That said, what we have also seen in the ALP’s positon is support for broadening the base of facilities captured under the Mechanism to include all facilities down to 25,000t CO2-e. 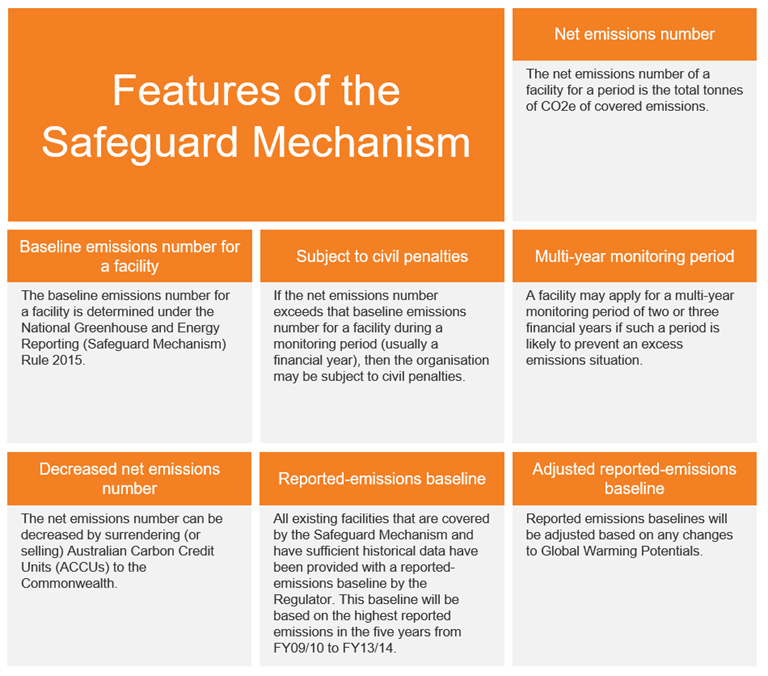 A review of the Safeguard Mechanism is scheduled for June 2017. Minister Hunt advised the Ministerial Roundtable that a safeguarding issues paper will be released in the second half of 2016.

The flexibility of the Safeguard Mechanism is one of its most talked about features, as the ability to set emissions baselines is set out in the Rule rather that the Act. Therefore amendments to the Rule can be implemented without an act of parliament. The Minister for the Environment is therefore able to reduce baselines at any time in order to help meet Australia’s emissions reduction targets.

A further consideration arising from the negotiations concluded in Paris in 2015 is that national emissions targets are to be reviewed every five years. It is likely that this will result in Australia’s emissions targets being strengthened over time. The Government may therefore choose to introduce changes to the Safeguard Mechanism to drive emissions reductions and this will result in an increased liability for those entities captured under the scheme.

There is a shift in business’ risk profiles with the commencement of the Safeguard Mechanism. As Energetics’ Peter Holt said in his interview with Footprint, “Companies should ‘join the dots’ between the need for a national emissions trajectory declining towards net-zero emissions and the ramifications for their operations.”

One scenario is outlined in our recent abatement modelling work for the Department of the Environment. The report shows that the Emissions Reduction Fund and Safeguard Mechanism (working in conjunction to create a market for Australian Carbon Credit Units (ACCUs), have the potential to deliver more than 50% of the emissions reductions required if Australia is to reach its 2030 target of reducing emissions to 26-28% on 2005 levels. Noting that this is not the only option, as other policy levers can be used or new policies introduced such as an expansion of the RET.

Energetics can help your business to efficiently and accurately navigate the more complex elements of complying with the Safeguard Mechanism. Please contact any one of our experts.