What are the financial implications of a delayed transition to net zero?

Energetics’ Sally Cook and Dr Peter Holt are co-authors on a CSIRO report which provides a first of its kind breakdown of the transition impacts to Australia's key sectors of a drive to net zero emissions. In this short article, we provide an overview of the report and a link to read it in full.

The report acknowledges the scale of the transition facing Australia’s economy. With our large resources sector, vast distances requiring long-haul transportation, and energy systems heavily reliant on fossil-fuel based generation, we are emissions-intensive. As we are highly engaged in a range of global markets, we are also exposed to regulatory risk from outside our borders. On the other hand, we have extraordinary renewable energy resources, strong research institutions, and well-developed skills in low emissions technologies[1].

In view of these challenges and opportunities, disruption is inevitable along the path to net zero. However, disruption also opens the way for innovation. Our focus must be on smoothing the transition and unlocking the opportunities.

CSIRO’s Dr Whitten, who is the lead author, noted that while much focus has been on the need to decarbonise Australia’s electricity grid, the impact on our net zero trajectory is not such an issue, In an article published by CSIRO and accompanying the report, “Calculating the costs of net zero emissions”, he stated:

“The modelling revealed that in Australia we are not as exposed as we might have thought in some areas. In the electricity sector, for example, we already have a strong transition plan.”

“But we are definitely exposed in mining and other emissions-heavy industries like mineral processing. We don’t have a counterfactual of a smooth transition. But in general we can say that a faster transition will be a harder one for those fossil fuel intensive industries.”

Sally Cook draws out the following findings, which highlight the importance of both achieving absolute emissions reductions and the value of short term targets:

Further to Sally’s final point, the report notes that while our national target of net zero emissions by 2050 provides a clear economic signal for decarbonisation, the current 2030 target of 26-28% reduction on 2005 emissions requires that significant emissions reductions in the final decades. The resulting rapid transition would leave some sectors and states exposed to increased risk[2]. 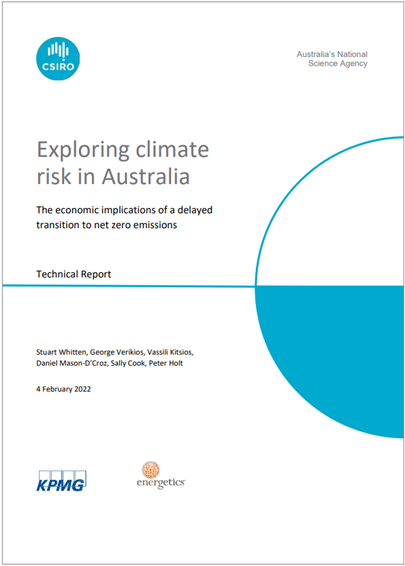