Global emissions reduction targets are expected to increase the demand for credible offsets making a strong case for linking Australian Carbon Credit Units with international markets and presenting an opportunity for the land sector as an offset provider.

Several studies have demonstrated how Australia can evolve to net zero emissions within a few decades1based primarily on significant decarbonisation of the electricity and transport sectors and by employing offsets from land use, land use change and forestry. And we will need to do so. Four of our state and territory governments (ACT, SA, Victoria and most recently NSW) have announced targets of achieving net zero emissions by 2050. Australia has a target to reduce emissions by 26-28% below 2005 levels by 2030, through our commitment to the Paris Agreement. This target and those of many other developed countries fall short2 of the requirements to limit warming to 2°C and to meet the commitment to a 2 degree world under the Paris Agreement. It’s reasonable then to expect that in time our national target will be strengthened.

Over the next few decades our Federal and state governments will have the task of facilitating significant decarbonisation and removing barriers to change through policy measures, targets, incentives or subsidies, and market mechanisms. Of these market mechanisms, the creation and trade of emissions abatement via Australian Carbon Credit Units (ACCUs) has potential to evolve. Currently ACCUs can be generated from eligible offset projects including sequestration in soil and vegetation, and traded domestically either with Government (via the Emissions Reduction Fund (ERF)) or on the secondary market. At present, demand for ACCUs on the secondary market is limited to:

The value of abatement under ERF contracts is estimated the order of $10-15/ per tCO2e ($11.83 on average in late 20163). Although land based projects are generally considered to be low-cost when compared to other abatement activities, prices in this range are unlikely to generate significant additional investment or land use change. The CSIRO4 found that no substantial increase in the supply of land based offsets would occur at prices under $50/tCO2e. However this study finds that once this threshold is reached, sequestration becomes financially competitive with alternative land uses and supply could steadily increase.

At the higher carbon prices under the CSIRO’s strong abatement scenario5 there is potential for the land sector to achieve almost 3 billion tCO2e of abatement by 2030. Energetics’ analysis indicates that approximately one third of this (900 million tonnes cumulative abatement6) will be needed to meet the national emissions reduction target of 26-28% by 2030. This leaves a potential 2 billion tCO2e in offsets in excess of domestic requirements which could be produced between 2020 and 2030. Exporting these offsets could deliver significant value to the national economy and to regional areas in particular.

However, ACCU prices are unlikely to be high enough to unlock this investment in the short term.  Our modelling indicates that the $50/tCO2e threshold to stimulate additional land sector offsets may not be reached until 2027 (or later, depending on demand and the extent of international linkage), at this point ACCU prices begin to converge with international pricing. The graph below shows the US and EU ETS prices could approach $50/tCO2e (US$37 at the current exchange rate) by 2025. 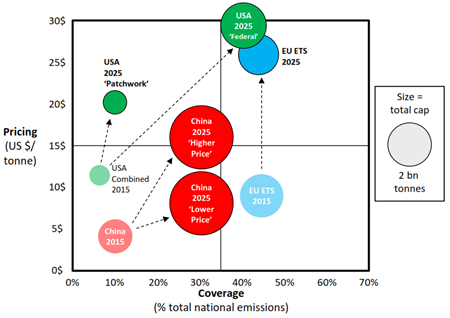 Figure 1: Price and coverage of carbon trading scheme scenarios in 20257

International demand for offsets is expected to strengthen over the next decade. Many countries have targets under the Paris Agreement and they may look to the global offset markets to provide the lowest cost abatement. Other emerging schemes, such as the Carbon Offset and Reduction Scheme for International Aviation (CORSIA) which will begin a pilot phase in 2021, are also expected to increase the demand for credible offsets.

However, to maximise the carbon benefit and economic opportunities from our domestic land sector there are several barriers which need to be addressed:

The Clean Development Mechanism (CDM) and Joint Implementation (JI) schemes are the frameworks currently available to developed countries to generate international carbon offsets for trade. However, the future of these credits is unclear beyond 2020 when the Kyoto Protocol draws to a close. Article 6 of the Paris Agreement provides a framework for ‘Internationally Transferred Mitigation Outcomes’ which may develop into a new offset protocol for the post-2020 period. Australia will have a seat at the negotiation table when the details of Article 6 are discussed at COP (Conference of the Parties, the mechanism through which many international commitments to reducing climate impacts are delivered) meetings over the coming years. There is an incentive for us to support any developments which allow for the trade of domestic offsets under an international scheme.

As our Government embarks on their 2017 review of climate policies we have recommended that they consider:

Encouraging investment in land based projects

Work by the CSIRO suggests that the abatement potential in the land sector is very high: up to 13 billion tCO2e by 20508. This abatement will be an important part of Australia’s achievement of its future climate change targets. Our modelling indicates that 900 million tCO2e of this will need to be unlocked by the end of 2030, and based on work by CSIRO, we expect that short term ACCU prices ($10-15/tCO2e) are unlikely to stimulate additional investment in land sector offsets, with much of the necessary abatement requiring prices of the order of $25/tCO2e to be realised.

As part of the 2017 Review we have recommended that the Government consider how Australia’s agricultural sector and land holders can be encouraged to utilise a large amount of marginal land to sequester carbon and create quality credits.

In addition to being a carbon sink, the land sector is also a large source of emissions primarily due to land clearing. The most recent national emissions accounts show that the land use, land use change, and forestry (LULUCF) sector was a net emitter of 913 ktCO2e in 20149. Actual emissions due to land clearing were 33.6 million tCO2e, and these emissions were offset by other activities such as forest management that contributed 32.7 million tCO2e of sequestration9.

Recent efforts by the Queensland Government to tighten the laws on onus of proof for illegal land clearing did not pass after failing to achieve majority support in parliament. Wherever possible the states should encourage complementary policy for afforestation, reforestation, and avoidance of clearing.