The International Energy Agency (IEA) released its World Energy Outlook (WEO) 2019 Wednesday 13 November. This is the tenth annual assessment of the energy and economic transition required to limit global temperature increases to below 2°C and provides an opportunity to reflect on the progress to date. In this article we summarise the major findings, the outlook as seen through the different IEA scenarios and the insights applicable to Australian businesses and policy makers.

A view through the IEA’s Stated Policies Scenario

Since 2009, global energy demand and energy-related CO2 emissions have most closely followed the IEA’s original reference scenario which is based on governments making no changes to existing policies. Known to many as the New Policies Scenario, it is now the Stated Policies Scenario[1].

Under this scenario, the IEA shows that now energy-related CO2 emissions need to reduce by almost twice as much each year, or an average of 730 million tonnes (Mt), compared with 400Mt reductions per year required from 2009. The challenge is compounded as energy-related emissions in 2018 actually increased by 800Mt or 1.9% to hit another historic high. Furthermore, more than 100Mt of emissions growth is expected each year to 2040.

In this year’s report, the IEA has looked further into the future to present projections beyond 2040. What we see is a peak or plateau of emissions around 2045 under the Stated Policies Scenario. Whilst not a business-as-usual forecast, this emissions trajectory is consistent with limiting warming to 2.7°C with a 50% probability (or 3.2°C with 66% probability).

Emissions under the Sustainable Development Scenario

As illustrated below, the IEA Sustainable Development Scenario requires a significant and concerted effort to peak and then reduce emissions. The measures cited include energy efficiency and accelerated adoption of renewables, amongst others, over the period to 2050.

Chart 1: Energy-related CO2 emissions and reductions by source in the Sustainable Development Scenario

What does this mean for Australia?

Australia’s abatement task is similarly challenged by a lack of a clear peak in national emissions. As illustrated below, Australia’s annual task is challenging and becoming harder with every year of delayed action. 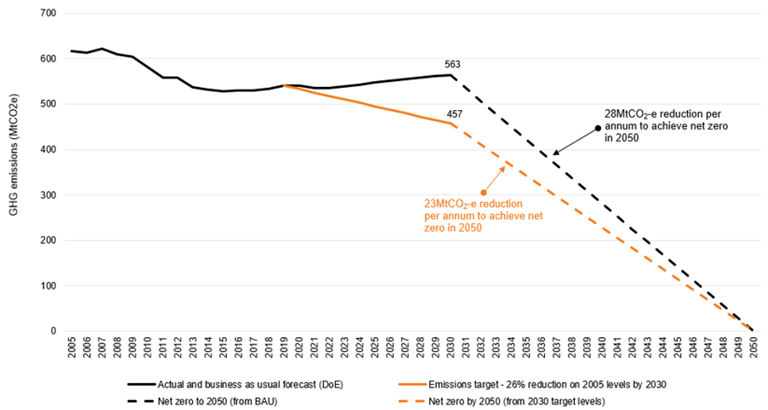 The decarbonisation of the Australian economy is closely tied to global energy policy, and to market and technology shifts. We see this through the allocation of capital as directed by investors seeking to both respond to opportunities in the energy transition and to avoid energy market risks.

In terms of opportunity, Australia is already leading in solar PV penetration and grid-scale battery installation. However, the IEA calls out Australia in the World Energy Outlook 2019 for our very large potential to develop offshore wind at low to moderate costs. At a levelised cost of electricity of around $60/MWh for offshore wind, the IEA argues that this potential should be realised across Australia.

We are also identified as one of the players which could bring low-carbon hydrogen to the global market. Hydrogen production from fossil fuels with carbon capture and storage is proposed where there is gas supply and storage. The emissions reduction pathway for nations such as Japan is more likely to be supported by exports from Australia which use electrolysis to produce hydrogen which is then stored in ammonia for transport by ship. The IEA states that this process is likely to become viable at scale and with periodic surpluses of cheap or free electricity. Hydrogen production could be cost effective if there is sufficient difference ($30/MWh) between low-carbon electricity costs in Japan and Australia. Pilot projects are currently testing the application of this technology with the view towards commercialisation.

In terms of risks to the Australian economy, the fossil fuel sectors have been a key focus for the IEA as approximately three quarters of Australian oil, gas and coal production is exported. As Australia is currently the largest global LNG and coal exporter, international policy settings continue to impact our local producers.

For natural gas the IEA does not see substantial risk to global demand in the Stated Policies Scenario over the period to 2040. Australia’s participation in the seaborn LNG trade is likely to grow with liquefaction overtaking the historical method of transport via pipeline for inter-regional trade by the late 2020s. However, through this period Australia is not only expected to be overtaken by Qatar as the leading producer globally but compete strongly with emerging producers in the US, Canada and Russia.

Under the Sustainable Development Scenario, the IEA predicts that demand for LNG will slow considerably after 2030 as higher gas costs and international emissions targets have the potential to increase demand for cheaper and less emissions intensive substitutes. Therefore, Australia’s potential to grow or maintain volumes will depend heavily on market share. The key risk for Australia, highlighted by the IEA, is therefore supply related. With declining production in mature gas producing basins in Australia, a lifting of restrictions on gas development would be needed. This inevitably means a higher cost of extraction as wells previously considered uneconomic or inaccessible are developed. The IEA projects natural gas production in Australia could double if additional investment was unlocked by harmonising state hydrocarbon policies.

For coal, the IEA indicates Australia is one of the few major exporters projected to increase coal production to 2040 in the Stated Policies Scenario, despite a decline in total coal trade. Much of the growth occurs due to increased domestic consumption of coal in Indonesia which diverts their supply away from export. Continued import demand in Asia is also subject to rapid policy shifts, however Australia’s ability to supply may be limited due the difficulty of securing financing for greenfield projects.

Australia’s participation in the seaborne coal trade is also projected to see a decrease in thermal coal trade (15%) and increase in metallurgical coal (also 15%) to 2040 under the Stated Policies Scenario.

Under the Sustainable Development Scenario, the IEA predicts that coal trade could fall by two-thirds by 2040, thereby exposing Australian production which is dependent on exports for over 90% of demand. Although this demand shift would be significant, the IEA has traditionally recognised a number of relative cost and quality advantages for Australian coal producers. In the World Energy Outlook 2019 report, it also draws attention to the relatively low indirect emissions intensity associated with average Australian coal mine emissions from fugitives, extraction, processing and transport. In a carbon-constrained world the relative advantage seen in Australia’s mining processes may therefore allow greater share of trade if carbon prices are applied internationally across coal export countries.

The challenge of transforming the energy mix is increasing

​While the number of net-zero emission pledges by governments and companies are increasing the scale of ambition, the window of opportunity for achieving the necessary emissions reductions as advised by climate science is closing.

In Australia, the delay in government action means that businesses across the economy will need to look to other drivers to reshape their business models and supply chains, and laggards will be overcome by the pace of change required. The IEA outlook suggests that existing Australian coal and gas assets will continue to see export opportunity, although greenfield projects will be increasingly less attractive once carbon costs and potential demand constraints are factored in. On the other hand, the IEA sees investment in emerging low carbon sectors not growing sufficiently quickly to support emissions reductions goals.

Australian companies should look beyond local policy settings and actions to the leadership other countries and global peers have shown with commitments to reach carbon neutrality by 2050. More than 65 countries, together with the European Union, have set or are actively considering long-term net-zero carbon targets. The economies of these countries together account for 21% of global GDP and nearly 13% of emissions in 2018. Science-based commitments are also reflected by states, cities and at a corporate level. The speed of emission reductions will need to increase, however, the targets set expectations and drive innovation to reduce the cost and accessibility of low carbon technology.

For more information you can check out the IEA’s executive summary or purchase the full report to view online: World Energy Outlook 2019. 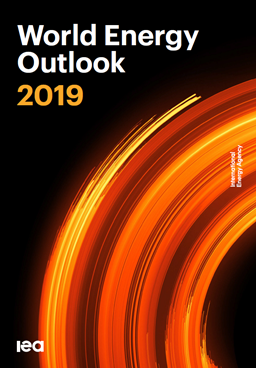 [1] The Stated Policies Scenario or STEPS, provides a detailed sense of the direction in which today’s policy ambitions would take the energy sector. Identical in design and previously known as the New Policies Scenario, it has been renamed to emphasise that it only considers specific policy initiatives that have already been announced.