In 2016 the Clean Energy Regulator stated that 6000 megawatts (later adjusted to 6400MW[1]) of large-scale generation capacity would be needed between 2016 and 2018 to meet the 2020 Renewable Energy Target of 33,000 gigawatt hours (GWh).  As of the end of May, we see projects in the order of 7.2GW capacity either in operation, or firmly committed, and a further 809 MW deemed probable[2].

Playing a significant role in developing this renewable energy generation capacity have been Australia’s largest energy users – businesses, universities, state and local governments. From 2016, corporate power purchase agreements (PPAs) supported renewable energy projects with a combined capacity of more than 2550MW as illustrated below, of which about 2150 MW was investment in new projects[3]. This is more than a third of the 6400 MW additional capacity that is required by the end of 2018.

Furthermore, we estimate that 50% of the RET in 2020 could be delivered by corporate-backed solar and wind projects

While the RET has been a major consideration in making corporate PPAs attractive to business, there are many drivers. Broadly they are: 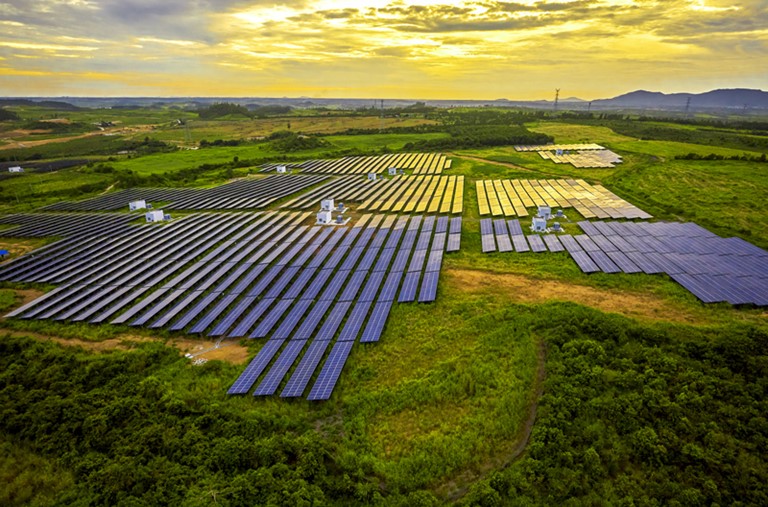 Deals to date: most projects are in Victoria, often solar and long term

Energetics has developed a tracker showing the deals secured from 2016.

As at 20 June 2018, approximately 60% of the project capacity supported by corporate PPAs is solar, and the remainder wind. Victorian projects continue to dominate, accounting for more than 50% of project capacity (about 1400MW). Although outside the corporate PPA market, project developers and investors in Victoria will receive a further boost later this month when the State Government is expected to announce the results of the Victorian Renewable Energy Target (VRET) reverse auction. 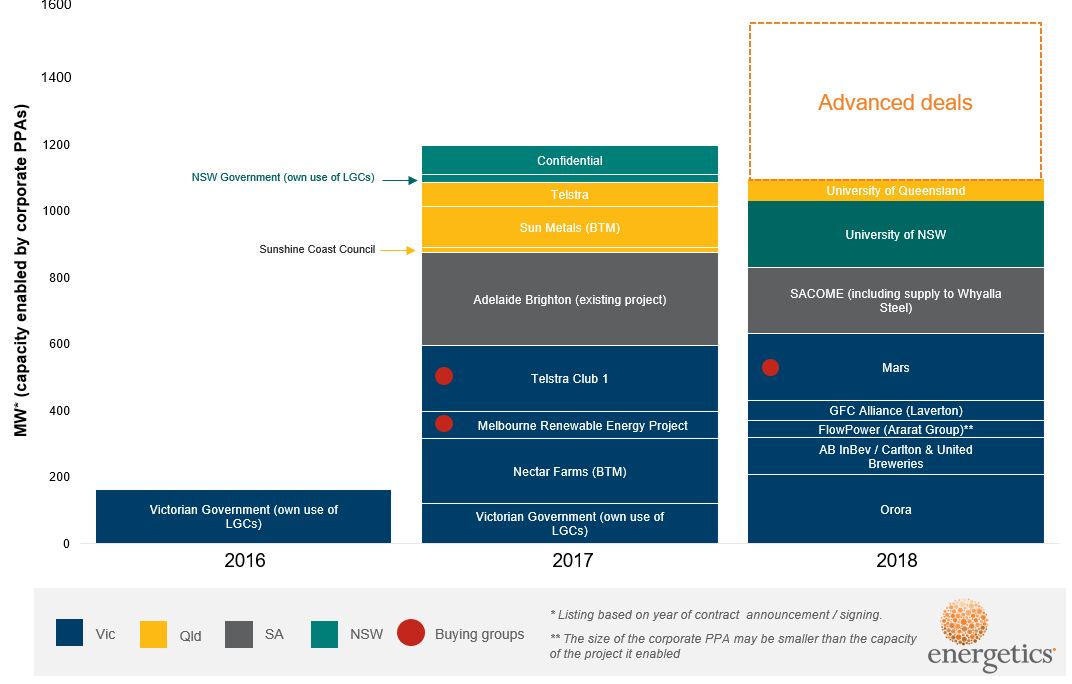 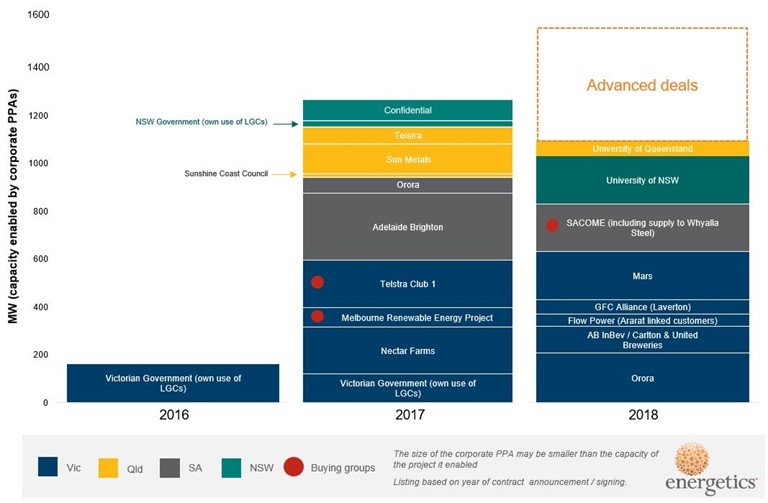 The longest agreement recently signed was the 20 year Mars Australia PPA with a new project, and the shortest was the five year Adelaide Brighton PPA with an existing project.

The models used by corporates are diverse and some of the projects are strictly speaking not corporate PPAs (ie. agreements for the output from an off-site project). Notably:

While the prices in most deals are confidential, where known, it can be misleading to focus on the headline price. Corporate PPA prices are influenced by a range of factors, including but not limited to those listed below.

As with price, details of contract and pricing models are generally confidential. However, it is clear that some view corporate PPAs as financial risk management instruments such as the members of the Telstra Club 1 transaction,[5] whilst others view it as an alternative way to purchase the electricity they consume such as members of the Melbourne Renewable Energy Project Buying Group[6] and the University of NSW. The drivers behind the choice of contract models are diverse and include factors such as the organisation’s risk appetite, accounting policies and inhouse capability to manage the agreement during the operational phase. Some organisations have contracted for 100% of their consumption, driven by sustainability leadership considerations whilst others allocated a smaller portion in order to mitigate their exposure to price increases and market volatility.

Buyers groups accounted for 20% of the project capacity as illustrated above and continue to hold appeal with Intelligent Water Networks (Victoria) and the Southern Shire Regional Organisation of Councils (NSW) actively engaging the market at present. As noted from statements made in the public domain, many more energy users are currently in the market for individual corporate PPAs, with announcements expected to continue throughout the year from organisations such as Monash University, University of Technology (Sydney), Coles, Westpac, and Sydney Opera House.

Energetics successfully supported the conclusion of three transactions to date, including the Melbourne Renewable Energy Project. We are working with a number of organisations to provide independent assessments of the value of offers under consideration.  We are also advising on market engagement approaches and the integration of a corporate PPA into an overall energy management strategy.

We will continue to track deals as they are announced.

[1]Clean Energy Regulator | Large-scale Renewable Energy Target market data Noting that the figures cited have been updated since the article was originally published.

[3] Projects with a capacity of less than 10 MW not listed. As announced in RenewEconomy, One Step off the Grid, corporate websites, government websites and other industry sources.

[4] Four projects with 35MW for one allocated to Melbourne Trams