Australia has done little on emissions, and is not planning much in next decade
Date
February 2020
Author
Dr Gordon Weiss

In response to the bushfire catastrophe, Prime Minister Scott Morrison stated that he would evolve Australia’s climate policies. We have also heard that the Government will look to technologies to drive emissions reductions.

In the first of a series of three papers examining the technology pathways that Australia could adopt to achieve a net zero emissions economy, Energetics has reviewed Australia’s emissions projections 2019, published by the Department of Environment and Energy. What we see in this record of emissions reduction efforts is that Australia essentially met its Paris Target doing no more than business as usual and that improvements anticipated between now and 2030 are either cost effective transitions – replacing aging coal-fired power stations with new renewable generators and adopting electric vehicles; or the natural evolution of technology – better buildings, better industrial processes, better machines. There is no vision for any new ‘disruptive’ technologies.

Yet the 2019 Projection, while highlighting Australia’s lack of ambition, also shows where the opportunities lie for deeper cuts and an economic transformation.

The 2019 projection of Australia’s emissions was published by the Commonwealth in December 2019 (the 2019 Projection)[1]. The headline results are:

Despite the Paris Agreement not yet allowing it, the Australian Government plans to apply the overachievement of the Kyoto target against the Paris target. In using these additional emissions reductions, the Government has declared that Australia will achieve its 26% reduction target by a slim margin of 16MtCO2e.[2]

The Australian Government has estimated that emissions in 2030 will be 511 Mt CO2e. Figure 1 shows the historical and projected emissions for Australia. Data values can be seen in our National Emissions Forecast Information Centre. 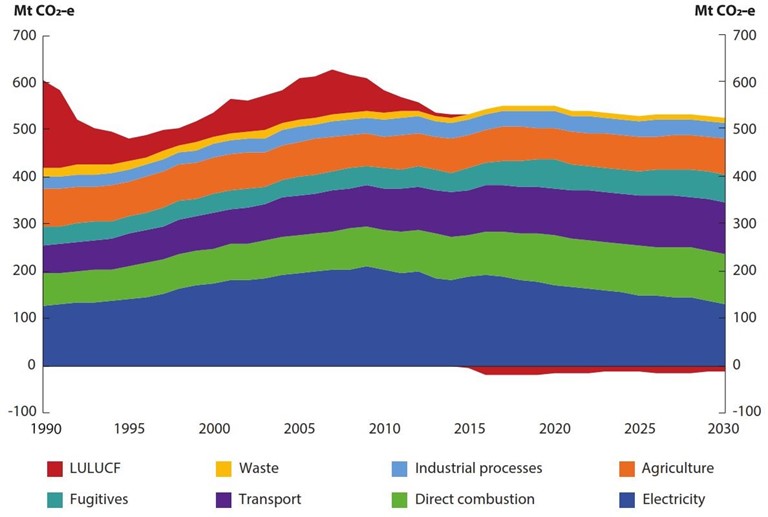 It is worth noting that Figure 1 shows emissions reductions that are lower than all previous projections through to 2030. In this case, the drop in projected emissions compared to the projection issued in 2018 is due to:

What has Australia really achieved?

The bulk of Australia’s emissions abatement to date has been delivered by a reduction in deforestation before 2013. The land sector carried this burden and rural landowners (including the Crown) had restrictions placed on their land.

Emissions excluding land use, land use change and forestry (LULUCF) have risen substantially since 1990: the base year for the first commitment period target. They have also risen since 2005, the base year for the second commitment period target. Non-LULUCF emissions exceeded notional targets based on the Kyoto Protocol settings by more than one billion tonnes of CO2 over the 13 years the Kyoto Protocol was in force.

This is a very different result to the overachievement of 411 Mt CO2e. 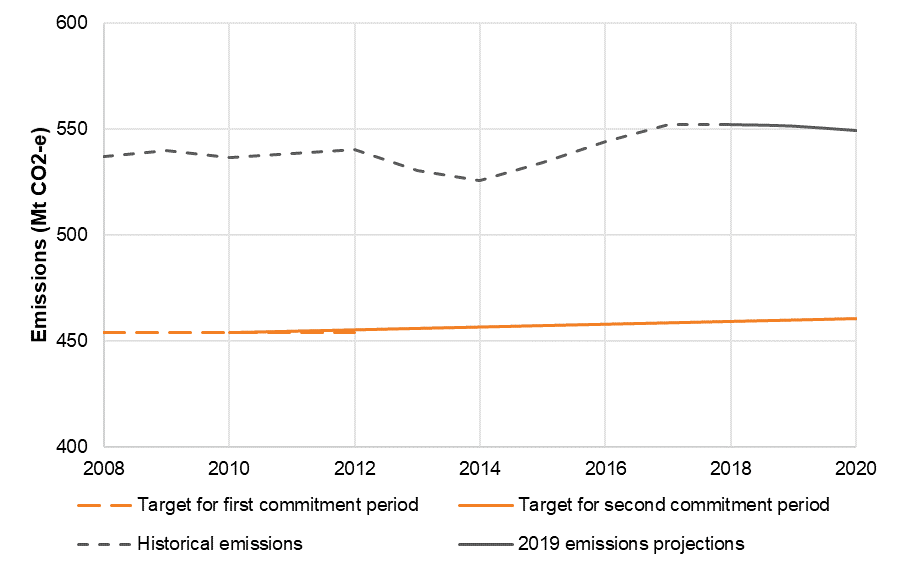 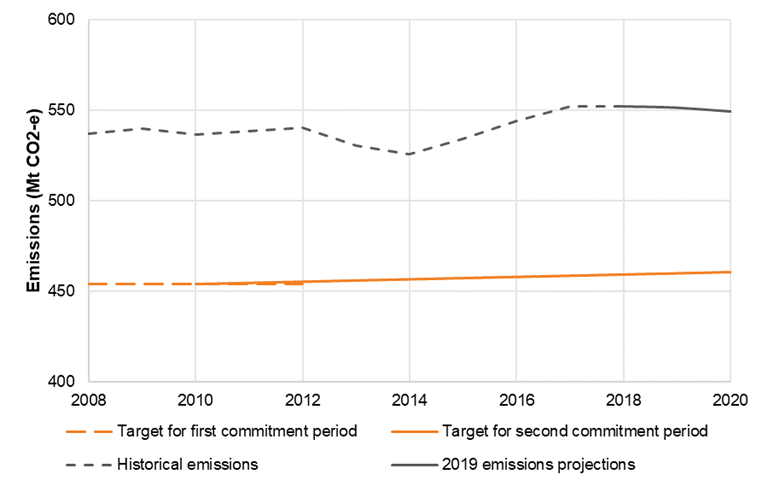 Figure 2: Australia's performance if LULUCF emissions are not included

Two features are important. The period when emissions fell corresponds to the time of the carbon pricing scheme. The rebound corresponded to its replacement with the Emissions Reduction Fund (ERF) and Safeguard Mechanism. Because the ERF delivered abatement largely through the land sector, any impact of the ERF is not captured in Figure 2.

The weak downward trend after 2017 is due to a fall in emissions from the electricity sector.

The next figure shows that the emissions intensity of Australia’s electricity has been falling due to the rise of renewable power generation. Without this change in the generation mix, the fall in emissions (excluding LULUCF) over the period of the carbon price would have largely disappeared and the weak downward trend in the latter years would have been replaced by an on-going rise in emissions. 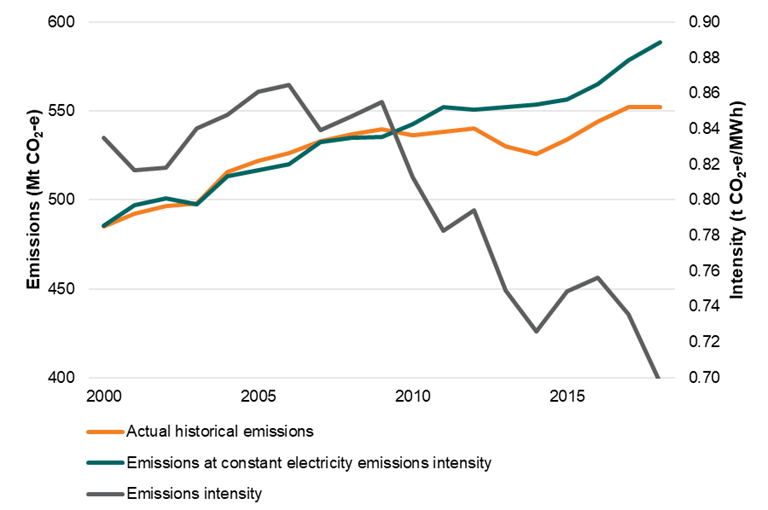 Except for these two sectors, Australia has done very little to prepare for future emissions abatement. This unfortunate reality is reflected in the 2019 Projection.

Insights across the sectors

Electricity (responsible for 34% of emissions in 2019)

The changing economics of renewable power generation coupled with the closure of aging coal fired power stations sees the emissions from the electricity sector fall significantly compared to 2005.

The 2019 Projection largely applies the status quo and offers no guidance on how direct combustion can be decarbonised.

Transport (responsible for 19% of Australia’s emissions)

The 2019 Projection is largely forecasting the status quo except for the car fleet, when the rise of electric vehicles will constrain the growth of emissions from light vehicle transport. The potential rapid growth in the EV fleet at the end of the decade will demand rapid expansion of the supporting infrastructure.

Other sectors except LULUCF (emissions from agriculture, fugitives, industrial processes and waste responsible for one third of Australia’s emissions)

Land use, land use change and forestry (LULUCF)

The Australian Government is relying on the Climate Solutions Package and enduring land clearing restrictions to realise the majority of the net negative emissions from the LULUCF sector.

In reviewing the 2019 Projection, we see that Australia’s energy sector is the only one to have transformed with the adoption of low emissions technologies. Further, the Projection is just an extension of the status quo, and any improvements in emissions intensity between now and 2030 are broadly consistent with the long-term improvements in technology.

We noted that the 2019 Projection included a strong technology uptake scenario. This largely assumed that “the costs of technologies, particularly renewables, batteries and electric vehicles, decline faster than in the baseline, encouraging greater uptake by households, businesses and industry”, which essentially means more renewable generators and electric vehicles but no changes to the emissions intensity of other sectors.

After 2030 there won’t be another basket of carryover units and much more will be needed than closing a few more coal-fired power stations and buying more electric vehicles.

On 25 May 1961, President John F. Kennedy asked the United States to “commit itself to achieving the goal, before this decade is out, of landing a man on the moon and returning him safely to the Earth”. The realisation of this audacious ambition on 20 July 1969 transformed the United States and led to the discovery of much of the science and engineering that made the modern world.

Perhaps then the Australian Government could commit to achieving the Paris Target without applying the carryover units by finding ways that new Australian technologies could close the gap between the 2019 Projection and the Paris Target. Australia has unrivalled renewable energy resources and the strategic mineral resources needed to support a low-carbon future. What is needed is the science and engineering to apply these resources to the steep reduction of emissions in all sectors of the economy and bolster sequestration efforts for those emissions sources which cannot be eliminated.

Wouldn’t this position Australia as a leader in the transition to a zero-carbon world?

More insights are developed in our second and third papers. You can read our detailed analysis of the 2019 Projection in our reports in the National Emissions Forecast Information Centre​.

[2] Strictly speaking, after applying the 411 Mt CO2e Australia will overachieve by the 26% reduction by 16 Mt CO2e and will require 51 Mt CO2e of cumulative emissions reduction between 2021 and 2030 to meet the 28% reduction target.