Project: Technical advice and commercial due diligence for the renewable energy auctions

The ACT Government has a target to be carbon neutral by 2020, as well as support the national grid to transition to 100% renewables through its Next Generation Energy Storage Program. In working towards the fulfilment of these goals, a series of renewable energy auctions were held to procure 600MW in large scale wind and 40MW of solar power. Energetics was engaged by the ACT Government to provide technical and commercial due diligence services across all five auction rounds.

Energetics served on the panel of advisors, supporting the ACT Government with the assessment of tender responses, as well as the provision of related market and technical advice. Energetics is proud to have been engaged by the ACT Government across all five large-scale renewable energy auction rounds to provide technical and commercial due diligence services. We also provided advice on guarantees and market timing of the auctions.

The ACT Government attracted interest from world-leading renewable energy companies and investors, including Neoen, RES, and Fotowatio Renewable Ventures (FRV). Investment under the ACT Government’s programs accounted for 53% of Australia’s total investment in new large renewable energy project capacity in 2015 and 2016 (measured in MW). With the conclusion of the auctions, the ACT contracted 40MW large-scale solar PV and 600MW wind − sufficient to meet its 2020, 100% renewable energy target.

Each auction run by the ACT delivered record low prices for renewable energy in Australia, proving valuable price signals to the rest of the market. The biggest winner from these auctions was Neoen / Megawatt Capitals’ 309 MW Hornsdale Wind Farm (Stages 1, 2 and 3 in three separate auction rounds) located in South Australia.  Hornsdale holds a 52% share of all wind capacity contracted by the ACT Government at a weighted average price of $80.44 / MWh (bundled offtake). Hornsdale’s bid price declined in each round from $92 in Stage 1, setting records for the lowest price paid for a bundled offtake during subsequent stages at $77 for Stage 2 and $73 for Stage 3.

Of the 10 projects awarded contracts, six were in production as at August 2017. Click here to read through ACT Government's full 2020 Renewable Energy Plan. 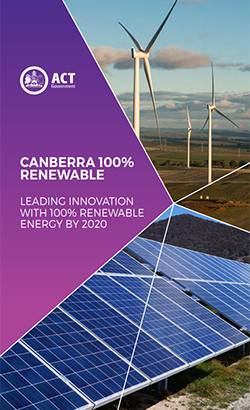 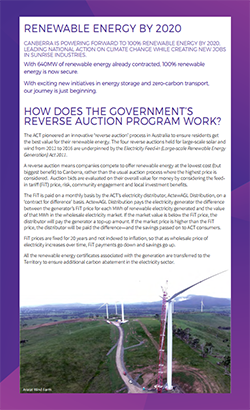 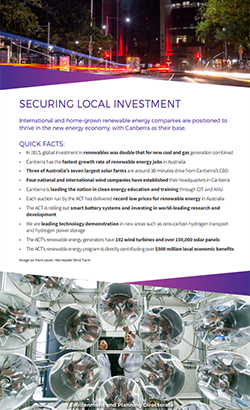